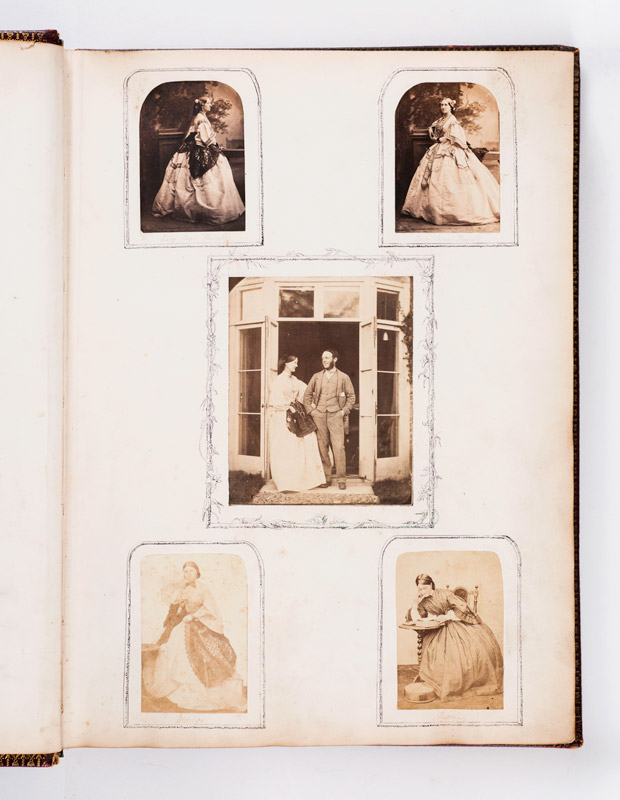 Lady Cosmo Russell, née Annie Norbury, was the daughter of John George Norbury, of Mammeter Hall, Leicestershire. Her husband, Lord Cosmo Russell, was a younger son of the 6th Duke of Bedford. He is known to have been a steeplechase rider and taken part in amateur theatricals, like Albert Ricardo. Lady Cosmo Russell was a good friend of Mrs. Ricardo and appears later in the album as “Annie”. There does not appear to be any family connection between the Russells and the Ricardos, so it was probably their shared interests that brought them together.

Mr. and Mrs. Albert Ricardo are standing in the doorway of Ray Mead Cottage, their home in Maidenhead, a Thames riverside town that is four miles from Windsor Castle and 29 miles west of London, in the English county of Berkshire. Mrs. Albert Ricardo, née Charlotte Frances Tyrwhitt, was one of seven children of Eliza Walwyn Macnamara and Sir Thomas John Tyrwhitt Jones, 2nd Bt. of Stanley Hall, Astley Abbotts, Shropshire. She was born in Bridgnorth, Shropshire in 1828. Her father had held the office of High Sheriff of Shropshire in 1816 and the office of Member of Parliament for Bridgnorth in 1818. Albert Ricardo was one of eight children of Harriet Levy and Jacob James Ricardo. He came from an affluent family of financiers and stockbrokers of Portuguese-Jewish descent. The 19th-century English political economist, David Ricardo (1772-1823), was his uncle. His ancestors had fled the persecutions of the Spanish Inquisition, eventually emigrating to Amsterdam, and then to England. Albert was born in Lambeth, London in 1820. In his leisure time, he was a member of the I Zingari cricket team and the Marylebone Cricket Club, a steeplechase rider who won the Cambridgeshire Stakes in 1847 on a horse called The Widow, and a founder-member of an amateur dramatic society, called The Windsor Strollers, in which he appeared as an actor on many occasions. Charlotte Frances Tyrwhitt and Albert Ricardo were married at St. George’s, Hanover Square, in London, on 6 August 1850. They had a son, Charles, born 30 December 1861. There are no photographs of Charles in the album, so it may have been during her pregnancy that Mrs. Ricardo completed the album.

Emily Gwendoline (Gwen) Williams was Madge Williams’ younger sister, who married William Henry Wellesley, Viscount Dangan (later 2nd Earl Cowley), in 1863. There may have been a family connection between the Tyrwhitt and Peers Williams families, as Mrs. Ricardo’s grandmother was a Williams. But it is more probable that they knew each other well, as they lived in the same part of the Thames valley.