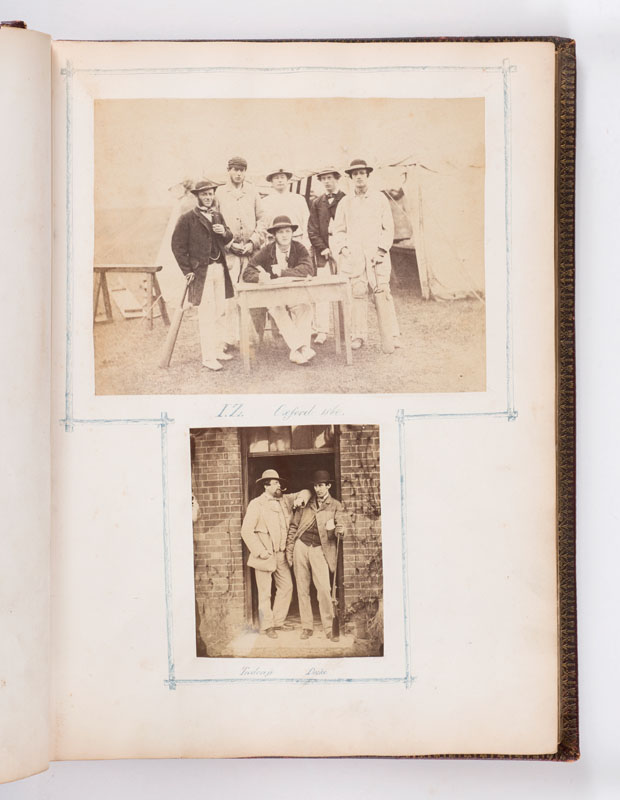 This is the first photograph in the album to show members of the I Zingari team of gentlemen cricketers who played all over the country – their name means “gypsies” or “wanderers” because they had no fixed home, and their aim was (and is) to promote the good spirit of amateur cricket. Albert Ricardo can be seen in this photograph on the far left, holding a cricket bat and wearing a hat with a ribbon – probably the I Zingari colours of red, gold and black. The photograph may have been taken by Robert Allan Fitzgerald, who was a keen photographer and took many pictures of his fellow I Zingari players.

Both Edward Tredcroft and Edward Tyrwhitt Drake played for I Zingari on many occasions. It was said that in any match I Zingari played that had “the four Edwards” – Edward Tredcroft, Edward Tyrwhitt Drake, Edward Chandos Leigh and Edward Balfour – it was sure to do well. Here the two men appear to be dressed for shooting, and Drake is holding a gun. The photograph might have been taken at Candover Park, where Edward Tredcroft lived, or at any of the country houses where the I Zingari team played and enjoyed sports and diversions during their stay.