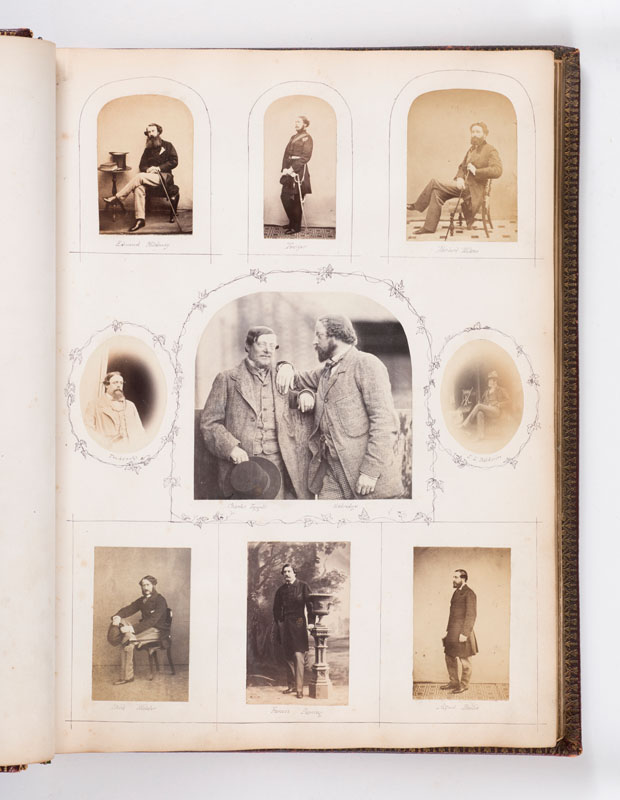 Edmond Henry St. John Mildmay was an army officer who served as an Equerry to the Duke of Cambridge, like Charles Tyrwhitt. He served with Radetzky’s Hussars in the Austrian Army and was British Commissioner at the Austrian Army HQ in 1859.

Lt. Col. Harvey Tower of the Coldstream Guards was identified by a similar photograph in a Victorian album created by Lady Mary Georgiana Filmer, that is in the Harvard Art Museum. “Towzer” may have been a nickname.

Herbert Louther Wilson was the son of Sir John Morillyon Wilson, a hero of the Napoleonic Wars. Herbert joined the army in 1845, but later sold his commission to establish himself as a portrait painter. He exhibited during the 1860s and 1870s at the Royal Academy, the British Institute and the Grosvenor Gallery.

Edward Tredcroft was a half-brother of Sophia, Countess of Uxbridge, a cricketer who played for I Zingari and Marylebone Cricket Club, and was Master of the Hampshire Hunt.

Charles Stainsby Piggott was a brother-in-law of Charles Gilbert Eversfield, the brother of Sophia, Countess of Uxbridge. He had a house in Hampshire, where the Earl of Uxbridge is known to have spent some time hunting in the 1850s.

John Loraine Baldwin was a cricketer and founder of I Zingari. He was associated with the Canterbury Old Stagers amateur dramatic society and was a member of the Four-in-Hand Club.

Dick Webster was probably Richard Everard Webster, later Viscount Alverstone, who became a barrister, politician and Lord Chief Justice. As a young man, he was an athlete and cricketer, and may thus have become known to Albert Ricardo.

Francis Baring was the son of Major Henry Baring, brother of Mary Bulkeley and a great-grandson of the Francis Baring who founded Barings Bank in 1762 (the oldest merchant bank in England). He served in the Crimean War and became a Lt. Col. in the Scots Fusilier Guards. He was also a sculptor.

Alfred William Baillie played for I Zingari from 1849 to 1862 and first-class cricket for Marylebone Cricket Club and other teams.