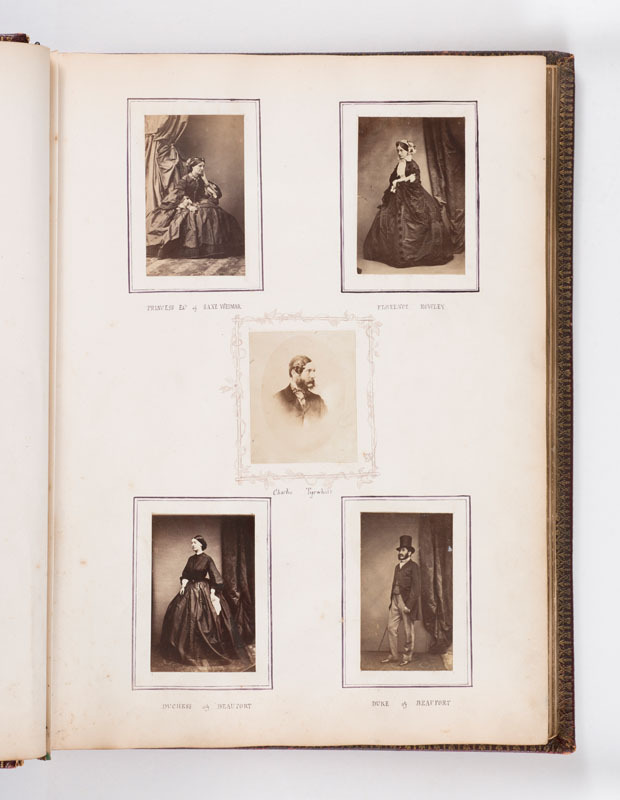 Lady Augusta Katherine Gordon-Lennox (1827-1904), daughter of Charles Lennox, 5th Duke of Richmond, married His Serene Highness Prince Edward of Saxe Weimar Eisenach in 1851. He was a Colonel in the Grenadier Guards and served in the Crimean War, during which he was wounded. Because her marriage was morganatic (she was a commoner, not a princess), she was not generally recognized as Princess Edward until 1866 in England, and was never so recognized in Germany.

Florence Rowley appears in this photograph under her maiden name – before her marriage in June 1861 – and later on as Mrs. Vivian. Florence Grosvenor Rowley (1836-1873) was the eldest daughter of Major George Rowley, of the Bombay Cavalry. She married John Cranch Walker Vivian (1818-1879), M.P., J.P. and D.L. for Cornwall, on 18 June 1861, as his second wife. They were divorced in 1869, after Florence left her husband for John Henry de la Poer Beresford, 5th Marquess of Waterford (1844-1895), whom she married on 9 August 1872. She gave birth to a stillborn baby on 27 March 1873 and died on 4 April 1873. She and her child were buried together. A memorial commemorating them, by the eminent sculptor Sir Joseph Edgar Boehm, is in the local church on the Waterford’s Curraghmore estate. It was commissioned by her husband, Lord Waterford.

Mrs. Ricardo’s brother, Charles Tyrwhitt, was the natural son of Sir Thomas John Tyrwhitt Jones, 2nd Bt., and Eliza Walwyn Macnamara, born in 1818, before Sir Thomas’ marriage to Eliza Walwyn Macnamara. Charles had a very successful military career, rising from an Ensign in 1834, to the rank of Colonel by 1856. He served as Equerry and aide-de-camp to the Commander in Chief, H.R.H. Prince George, Duke of Cambridge, during the Crimean War, and afterwards, and retired as a Lt. General. He was also a Deputy Ranger of Hyde Park and was living in the Ranger’s Lodge at the time of his death in 1886.

Henry Charles Fitzroy Somerset, 8th Duke of Beaufort (1824-1899), was the only son of the 7th Duke by his second marriage. He married Lady Georgiana Charlotte Curzon (1825-1906), daughter of Richard Curzon-Howe, 1st Earl Howe, in 1845. As Marquis of Worcester, he played cricket for I Zingari and other teams between 1851 and 1853. He succeeded his father as Duke in 1853 and became Lt. Col. Commandant of the Gloucestershire Yeomanry. His main seat was Badminton in Gloucestershire, where I Zingari played two matches in both 1858 and 1859. He was Master of the Beaufort Hunt and a member of the Four-in-Hand Club.