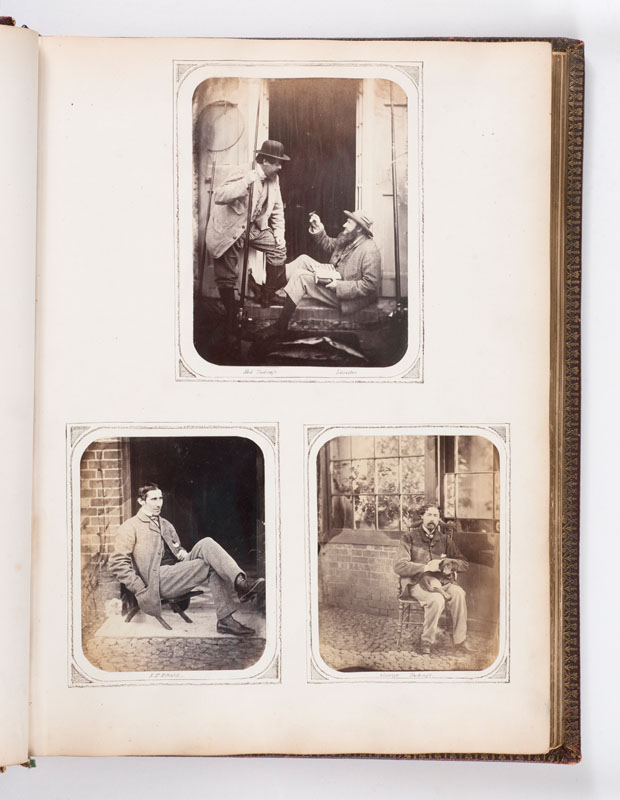 Edward (“Ned”) Tredcroft (1828-1888) is holding a fishing rod and net, and Thomas Coke, 2nd Earl of Leicester (1822-1909), is offering him a fishing fly from a book on his knee. Edward Tredcroft played in several cricket matches at the Earl’s seat, Holkham Hall in Norfolk, between 1848 and 1851. The two men would appear to have become good friends, since Edward Tredcroft was one of the house guests when the Earl entertained the Prince and Princess of Wales at Holkham Hall, with great splendour, in 1865. The Tredcroft family had been established in Horsham for two centuries, as landowners and magistrates. Edward’s father, Henry Tredcroft, had built Warnham Court just outside the town, and Edward had a cricket ground there at which he hosted I Zingari, and other teams, in the early 1850s. His cousin, Lt. Charles Lennox Tredcroft, said of Edward that he was a “very spoiled boy” who was given a pink coat (for hunting) at 12 years old, and who lived very extravagantly after purchasing a commission in “a fast cavalry regiment” – the 4th Light Dragoons – before coming into his property when he came of age. Baily’s Magazine of Sports and Pastimes (Vol. 49, 1888) said that he suffered heavy losses on the turf as a young man. He fell into the clutches of the notorious moneylender, Henry Padwick, and his bookmaking friends, and was forced to sell all of his Sussex estates between 1854 and 1856 to settle his debts.

The Rev. Edward Tyrwhitt Drake (1832-1904) was a steeplechase rider who rode in the Grand National in 1860, but this was a pursuit that he had to abandon when he took holy orders and was presented to a family living. As Rector of Amersham, he was an old-fashioned and somewhat eccentric “sporting parson”. He was a keen cricketer who played for Cambridge University, I Zingari and Marylebone Cricket Club. He loved hunting and survived a serious accident in 1877. John Maunsell Richardson, in Gentleman Riders: Past and Present wrote, “With hands and seat perfection, a more elegant horseman has probably never been seen, and to watch him sailing away at his ease over the fences in the Vale was a lesson in horsemanship in itself.”

George Tredcroft was a younger brother of Edward Tredcroft above, but he does not appear to have been such a notable sportsman. As a younger son, he only had a small private income.