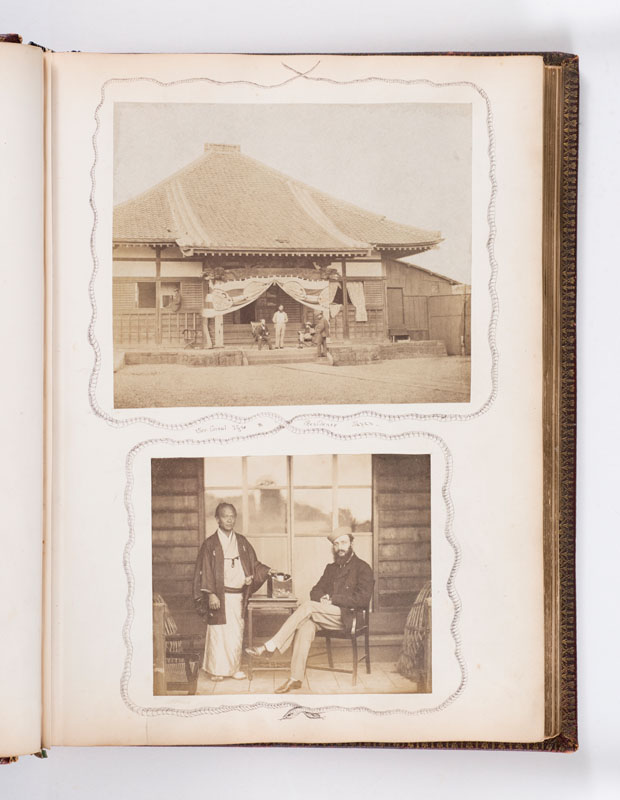 This photograph shows the first British Consulate in Japan, which was located in Joryuji Temple, in Kanagawa. The first British Legation to Japan, which was opened on 1 July 1859, in Edo (now Tokyo) occupied part of Tozenji Temple. It had been the custom to accommodate foreign embassies in these buildings. “A suitable residence for a foreign representative could not otherwise have been found,” wrote Ernest Satow, in his book, Diplomat in Japan.

On 26 October 1861, the Illustrated London News provided a detailed account of an attack on the British Legation by two samurai opposed to the entry of foreigners to Japan that occurred on the night of 5 July 1861. George Morrison, the intended Consul at Nagasaki, acted with great coolness and bravery during the attack and shot one of the samurai, thus saving the life of the Secretary, Mr. Oliphant, who had been wounded, and enabling the attack to be driven off.

A drawing surrounding the photographs on this page may be depicting two snakes engaged in a combat dance, competing to defend their territory and assert their social dominance. If that is what was intended, it would be analogous to the clash between certain factions of the Japanese and the members of foreign settlements and foreign governments living and working in Japan during this violent and turbulent period.

This photograph was taken at Kanagawa, near Yokohama, and appeared before, on page 6. Captain Francis “Punch” Howard Vyse presumably sent photographs to the Ricardos to show them something of his new life in Japan. Unfortunately, from the very beginning of his diplomatic career, there seem to have been doubts about his suitability for the post. The Government had to defend his appointment in the House of Commons and declare him to be a good choice. In 1860, Howard Vyse had to back down after an incident in which the Chinese servant of a Portuguese gentleman was killed by a Japanese – he had declared that the Chinese man was a British citizen and ordered his murderer be handed over to the British envoy for punishment. He was warned by the Consul-General, Mr. Alcock, that this was contrary to the provisions of the treaty with Japan. He also had to withdraw his order to the British community in Yokohama to carry arms at all times. (The Hobart Town Daily Mercury published this story on 26 June 1860, under the title A Very Nice Consul for Japan!)