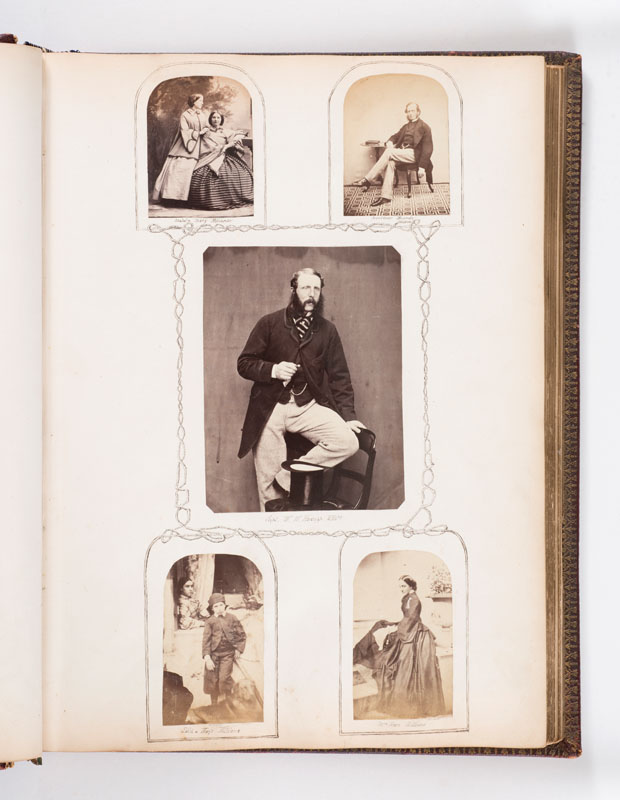 Mabel and Mary were the daughters of Mortimer Ricardo, who also had seven sons.

Mortimer Ricardo (1807-1876) was a first cousin of Albert Ricardo. He was a younger son of David Ricardo, the political economist, and a former Captain in the 2nd Life Guards. He lived at Kiddington Hall, near Woodstock, and was D.L. for Oxfordshire.

William Wray Hartopp was a Captain in the Royal Horse Guards and served in the Crimean War, including the battles of Balaclava (shot through the leg) and Chernaya, and the siege of Sebastopol. He was a cricketer who played for I Zingari and the Royal Horse Guards. He was also a leading light in the Windsor Strollers, an amateur dramatic society established in November 1860, with a committee which included Albert Ricardo, Thomas Knox Holmes, Captain Kit Pemberton and John Palgrave Simpson, as well as himself. The rules of the Windsor Strollers were based on those of the Old Stagers, in which many I Zingari players were involved. The Windsor Strollers also had the advantage of a close association with the Wandering Minstrels, an amateur orchestra led by the Hon. Seymour Egerton, which provided musical accompaniment for their productions.

Edith Williams was the youngest daughter of Lt. Col. Thomas Peers Williams. She is seen here with her brother, Hwfa Williams. Edith married Heneage Finch, 7th Earl of Aylesford, in 1871. She figured in a scandal when she bore a son to the Marquess of Blandford in 1881, after separating from her husband.

Mrs. Peers Williams was the wife of Lt. Col. Thomas Peers Williams, M.P. for Great Marlow, and the mother of Owen, Madge, Gwen, and the two children shown here, at left.