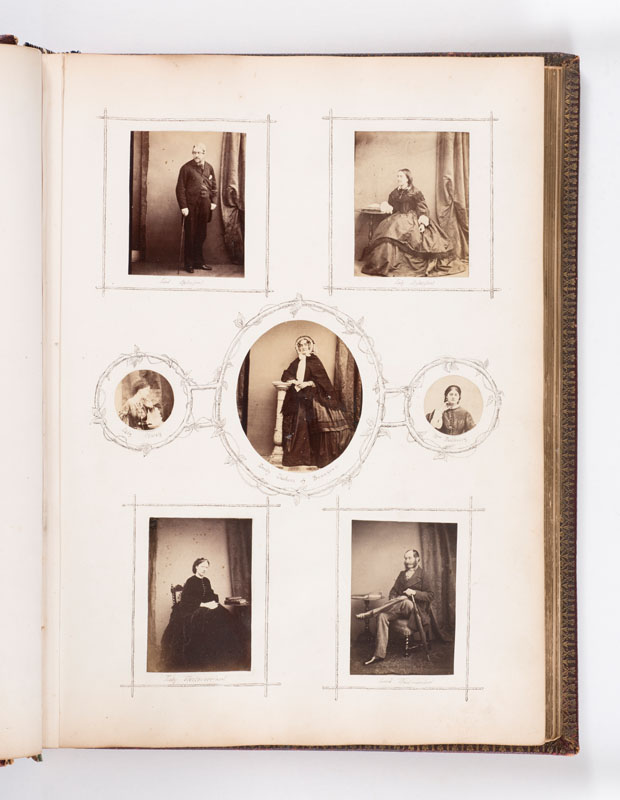 Heneage Finch, 6th Earl of Aylesford (1824-1871), previously Lord Guernsey, succeeded his father in 1859. He was a keen cricketer and played many matches for I Zingari, including those at Badminton in 1858 and 1859.

Lady Otway was Eliza Price Noble, née Campbell, wife of Sir George Graham Otway, 2nd Bt. There are several portraits of her by Camille Silvy at the National Portrait Gallery.

Emily Frances, née Smith, was the second wife and widow of the 7th Duke of Beaufort, who had died in 1853. Her mother was a sister of the Duke of Wellington. As Emily was the sister of the Duke’s first wife, the marriage could have been annulled, but it was finally accepted, and they had seven children.

Mary Emily Baring, daughter of Major Henry Bingham Baring and Lady Augusta Brudenell, and sister of Francis and Henry Baring, was the first wife of Captain Richard Lewis Mostyn Williams-Bulkeley. After an affair with Col. Henry Armytage, she was divorced in 1864.

Colonel Francis William Henry Fane, 12th Earl of Westmorland, served in India and in the Crimean War, where he was one of Lord Raglan’s aides-de-camp. He was related to the Pagets and the Ponsonbys, but was associated with horse racing rather than cricket. He succeeded his father, who was a diplomat, in 1859. His main seat was at Apethorpe in Northamptonshire.