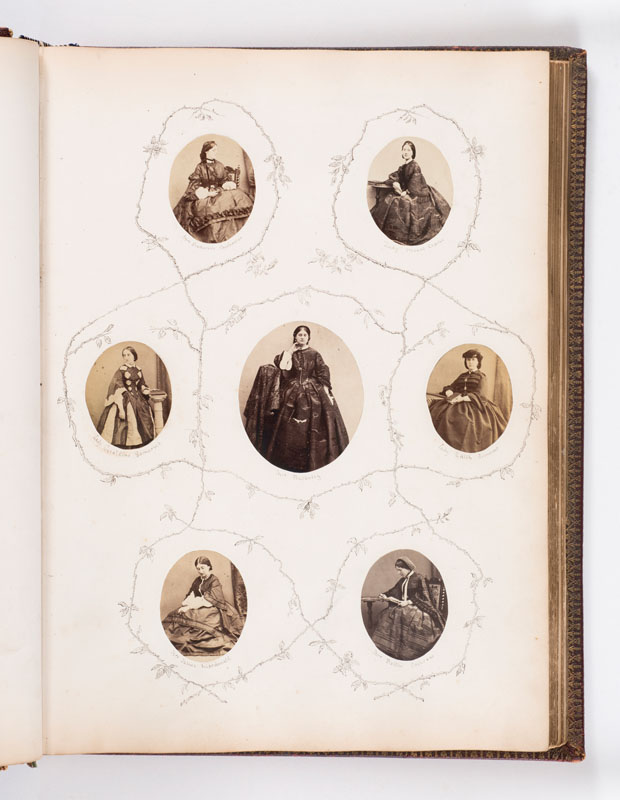 Lady Geraldine Somerset was the fourth daughter of the 7th Duke of Beaufort and his second wife, Emily. She was lady-in-waiting to the Duchess of Cambridge.

Mary Emily Baring, daughter of Major Henry Bingham Baring and Lady Augusta Brudenell, and sister of Francis and Henry Baring, was the first wife of Captain Richard Lewis Mostyn Williams-Bulkeley. After an affair with Col. Henry Armytage, she was divorced in 1864.

Lady Edith Somerset was the sixth daughter of the 7th Duke of Beaufort and his second wife, Emily.

Mrs. James MacDonald was the wife of Col. James MacDonald, who was a fellow Equerry and aide-de-camp to the Duke of Cambridge, then Commander-in-Chief of the Army, with Col. Charles Tyrwhitt.

Annabella Mary Elizabeth Drummond, daughter of Andrew Drummond of Cadlands, Hampshire, married Alexander Baillie Cochrane, M.P. for Bridport, in 1844. He later sat for other seats and was made 1st Baron Lamington in 1880. He and his wife were well known in London society.