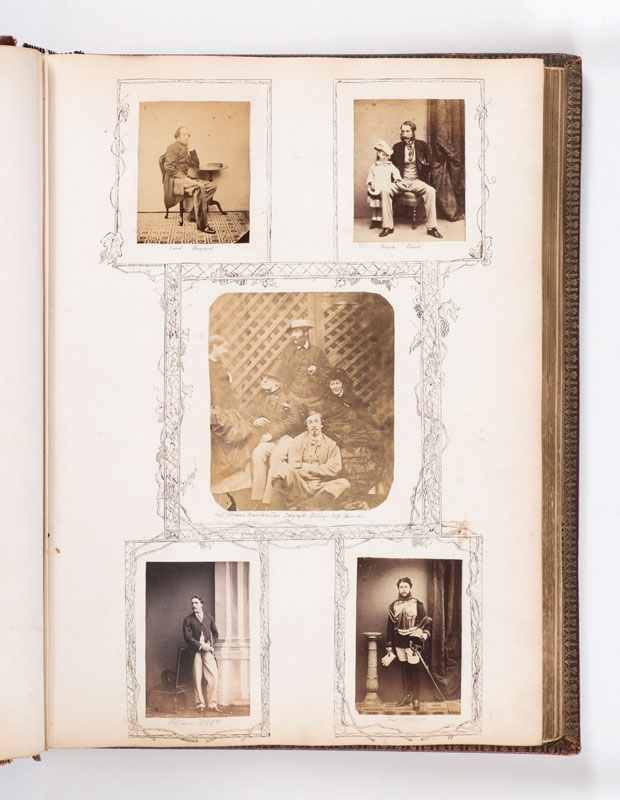 Orlando George Charles Bridgeman (1819-1898) was Viscount Newport in the early 1860s and became the 3rd Earl of Bradford in 1865. The family seat was at Weston Park in Staffordshire.

Captain Francis Frederick Lovell eloped with Lady Rose Caroline Mary Somerset, third daughter of the 7th Duke of Beaufort and his wife Emily, in 1846. Their marriage was opposed on the grounds of disparity of rank – Captain Lovell was only the son of a Hampshire squire, rather than a member of the nobility. They took the train to Gretna Green and walked up the hill “without flurry or display” to Gretna Hall, where they were married. Alma was their daughter.

Miss Williams was Madge Williams, the eldest daughter of Lt. Col. Thomas Peers Williams, M.P. for Great Marlow, who lived at Temple House, near Bisham, Berkshire, not far from where the Ricardos lived in Maidenhead. Commodore Eden was Superintendent of Woolwich Dockyard. Dalrymple (standing) was Col. (later General) John Hamilton E. Dalrymple, who served in the Scots Fusilier Guards and fought in the Crimean War. Col. the Hon. Percy Fielding of the Coldstream Guards fought in the Crimean War and was severely wounded at the Battle of Inkerman. Miss Ricardo was probably Miss Emily Ricardo, Albert’s unmarried sister.

Captain Owen Lewis Cope Williams was the son of Lt. Col. Thomas Peers Williams and married Fanny Caulfield in 1862. He joined the Royal Horse Guards in 1854, was promoted Captain in 1858, and retired as a Lt. General in 1887. He was M.P. for Great Marlow from 1880 to 1885, like his father before him.