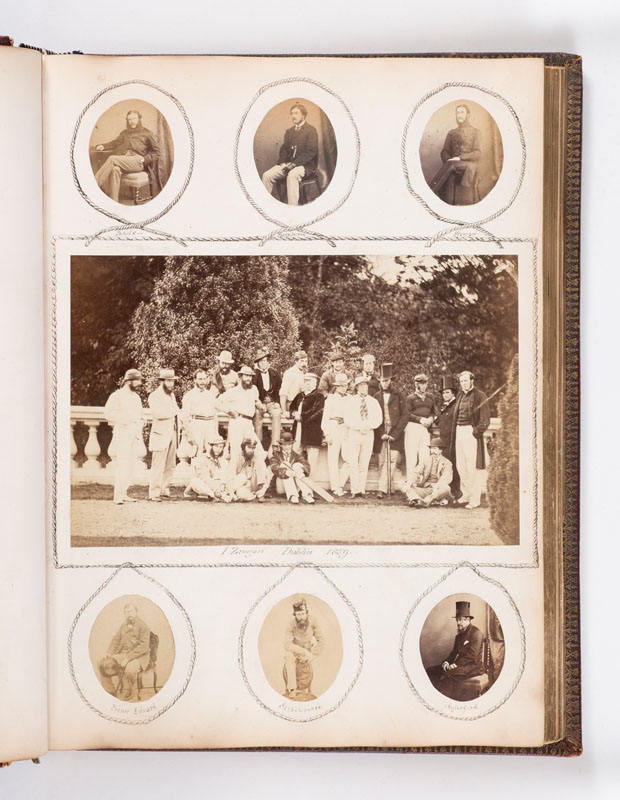 Philip Sidney, 2nd Baron de L’Isle and Dudley was a friend of the Ricardos who visited Ray Mead Cottage. He lived at Penshurst Place in Kent. He was a former Lieutenant in the Royal Horse Guards and probably got to know the Ricardos when stationed at Windsor, which was very near Maidenhead.

Farquharson was probably Lt. Col. Farquharson of Invercauld, who was photographed by Disdéri in the 1860s and attended the Braemar Gathering.

Stewart was Alan Plantagenet Stewart, Lord Garlies (1835-1901), who played cricket for I Zingari and the Royal Horse Guards before becoming the 10th Earl of Galloway in 1873.

The players in this group photograph of I Zingari are not identified, but Edward Chandos Leigh can be seen sitting in the front with a cricket bat, with Lord Skelmersdale beside him. The photograph may have been taken by Robert Allan Fitzgerald, who was a keen photographer and took many pictures of his fellow I Zingari players.

His Serene Highness Prince Edward of Saxe Weimar Eisenach married Lady Augusta Katherine Gordon-Lennox, daughter of Charles Lennox, 5th Duke of Richmond, in 1851. Because her marriage was morganatic (she was a commoner, not a princess), she was not generally recognized as Princess Edward until 1866 in England, and was never so recognized in Germany. He was a Colonel in the Grenadier Guards and served in the Crimean War, during which he was wounded.

Thomas Lyon-Bowes, 12th Earl of Strathmore and Kinghorne (1822-1865), was the Earl of Strathmore when the Ricardo album was being put together. He was a steeplechase rider and a cricketer who played for the Marylebone Cricket Club and I Zingari in the 1840s and 1850s. Claude Bowes-Lyon, 13th Earl of Strathmore and Kinghorne (1824-1904), succeeded his brother in 1865 and changed the family name from Lyon-Bowes to Bowes-Lyon. Claude Bowes-Lyon was a first-class cricketer during the 1840s and a Lieutenant in the 2nd Life Guards. He was the grandfather of Queen Elizabeth The Queen Mother, and the maternal great-grandfather of Queen Elizabeth II. The family seat is Glamis Castle, in Scotland. The hat in this photograph is called a Glengarry Bonnet.

Heneage Finch, 6th Earl of Aylesford (1824-1871), played cricket for I Zingari under the title Lord Guernsey, until he succeeded his father in 1859. He continued to play as H. Finch, or the Earl of Aylesford, until 1865. He played in two matches at Badminton in August 1859.