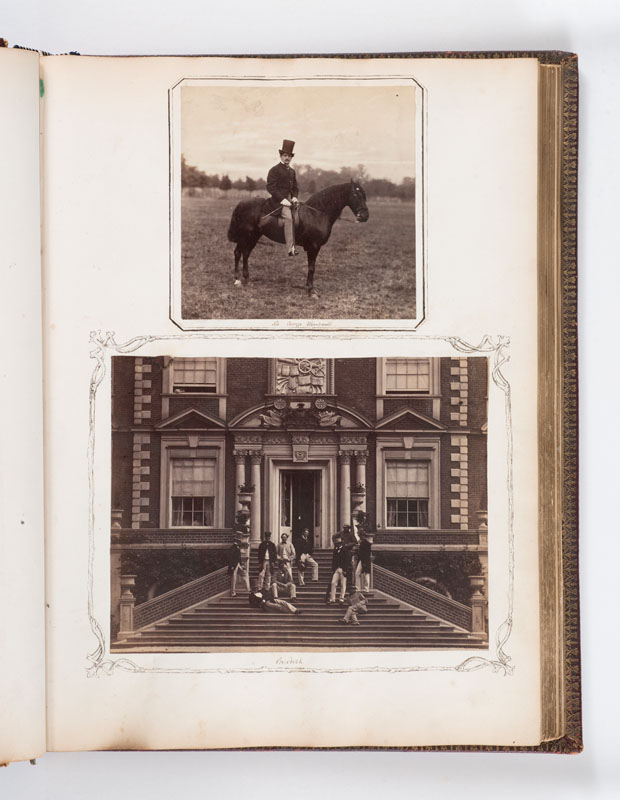 Sir George Orby Wombwell, 4th Bt. (1832-1913), served as a Cornet of the 17th Lancers during the Crimean War. As an aide-de-camp to Lord Cardigan, he rode immediately behind him in the Charge of the Light Brigade, at the Battle of Balaclava. During the battle, his horse was shot from under him. He managed to escape the Russians, who were holding him prisoner, by jumping on a loose horse. He retired from the army in 1855, after his father’s death, when he inherited Newburgh Hall, Coxwold, North Yorkshire. He served as High Sheriff of Yorkshire in 1861 and married Lady Julia Sarah Alice Child-Villiers, daughter of the 6th Earl of Jersey, in the same year. He had two sons, who both died before him; one in India, and the other in South Africa. At one time, he was considered to be the best-dressed man in London, and his estates were considered to be the best-managed in England. He was Master of the York and Ainsty Hounds, for several years. At the time of his death, he was the last surviving officer of the Charge of the Light Brigade.

Croxteth Hall, near Liverpool, was the seat of the 4th Earl of Sefton. I Zingari played there often; sometimes, on their way to play in Ireland, and on these occasions, the players were invited to stay at Croxteth for a few days and enjoy amateur theatricals and a ball. Edward Chandos Leigh mentioned staying at Croxteth in his memoirs, Bar, Bat and Bit, and met his wife, Katherine Rigby, there. The photograph shows a group of cricketers from I Zingari on the steps of Croxteth Hall, with Lord Sefton probably standing on the far left. This photograph was taken in 1859, when I Zingari played the Gentlemen of Liverpool at Sefton Park on 18 and 19 July. Edward Chandos Leigh can be seen standing in front of the doorway, with Wingfield Fiennes on the left and Fred Bathurst with a cricket bat on the right.