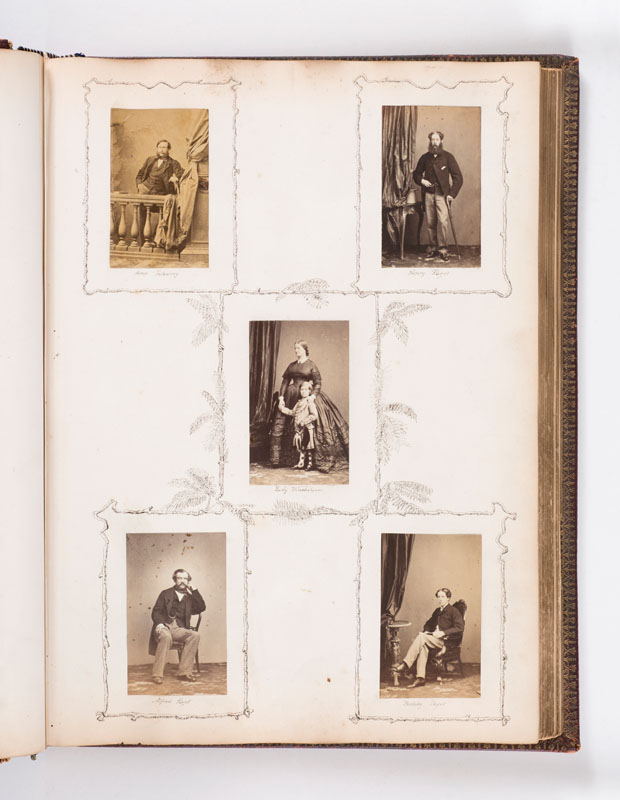 Horace Dormer Trelawney was a Captain in the Royal Horse Guards. In 1859, he married Maria Katharine Walsh, daughter of Sir John Benn-Walsh, Bt. (created Lord Ormathwaite in 1868) of Warfield Park, near Bracknell, Berkshire. Her brother Arthur married Lady Katherine Emily Somerset, a daughter of the 7th Duke of Beaufort. In 1872, Horace Trelawney built Shotwick Park, Gt. Saughall, Cheshire. He served as a J.P. and D.L.

Lady Constance Henrietta Paget (c. 1831-1878), daughter of the first marriage of the 2nd Marquess of Anglesey, and a sister of the Earl of Uxbridge, married George Finch-Hatton, 11th Earl of Winchilsea, in 1846 and had one son and three daughters. Her son, George, shown here, died in 1879.

Lord Alfred Paget (1816-1888) was a son of the second marriage of Henry William Paget, 1st Marquess of Anglesey, to Lady Charlotte Cadogan, former wife of Lord Henry Wellesley. He was M.P. for Lichfield from 1837 to 1865 and Chief Equerry and Clerk Marshall to the Queen in the 1850s. He was a shareholder in the Electric Telegraph Company founded by John Lewis Ricardo, Albert’s older brother, in 1846 and a Director of the North Staffordshire Railway Company (of which J.L. Ricardo was Chairman), from 1854 to 1855.

Lord Berkeley Charles Sydney Paget (1844-1913) was the youngest brother of Lord Henry Paget and half-brother of the Earl of Uxbridge. He played for I Zingari and various Staffordshire teams between 1860 and 1878.