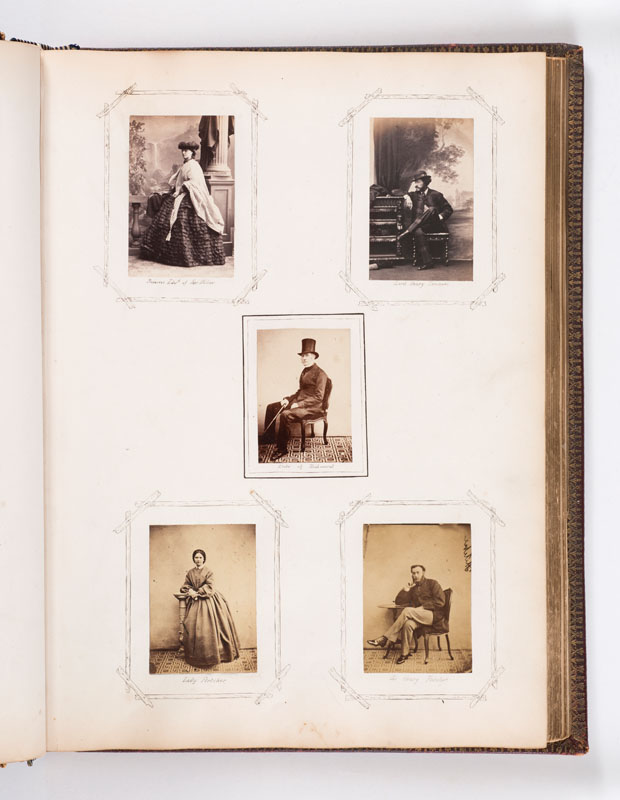 Lady Augusta Katherine Gordon-Lennox, daughter of Charles Lennox, 5th Duke of Richmond, married His Serene Highness Prince Edward of Saxe Weimar Eisenach in 1851. He was a Colonel in the Grenadier Guards and served in the Crimean War, during which he was wounded. Because her marriage was morganatic (she was a commoner, not a princess), she was not generally recognized as Princess Edward until 1866 in England, and was never so recognized in Germany.

Lord Henry Charles George Gordon-Lennox, P.C. (1821-1886) was the third son of Charles Gordon-Lennox, 5th Duke of Richmond and his wife Lady Caroline Paget, daughter of the 1st Marquess of Anglesey. He was M.P. for Chichester from 1846 to 1885, and held office in every Conservative government between 1852 and 1876. He was a close friend of Benjamin Disraeli, who appointed him to the Privy Council in 1874, when Prime Minister.

Charles Gordon-Lennox, 6th Duke of Richmond (1818-1903), was the elder brother of Lord Henry Lennox, Princess Edward of Saxe Weimar and Lady Cecilia Bingham. He succeeded his father in 1860. He played cricket while at Oxford and served in the Royal Horse Guards.

Sir Henry Fletcher (1835-1910), J.P., D.L., C.B., of Clea Hall, Cumberland and Ashley Park, Walton-on-Thames, Surrey, changed his name to Aubrey-Fletcher by Royal Licence on 1 January 1903, after he inherited the Aubrey estates in Buckinghamshire and Wales. Sir Henry also had estates in Sussex, at Southwater, near Horsham, inherited from his great-grandmother, Catherine Lintott, and Ham House, in Angmering. He was made a Lt. in the Grenadier Guards in 1855 and commanded the Sussex Volunteer Infantry Brigade as Lt. Col. after 1865. He served as M.P. for Horsham and Lewes, and was appointed as a Privy Counsellor in 1901.