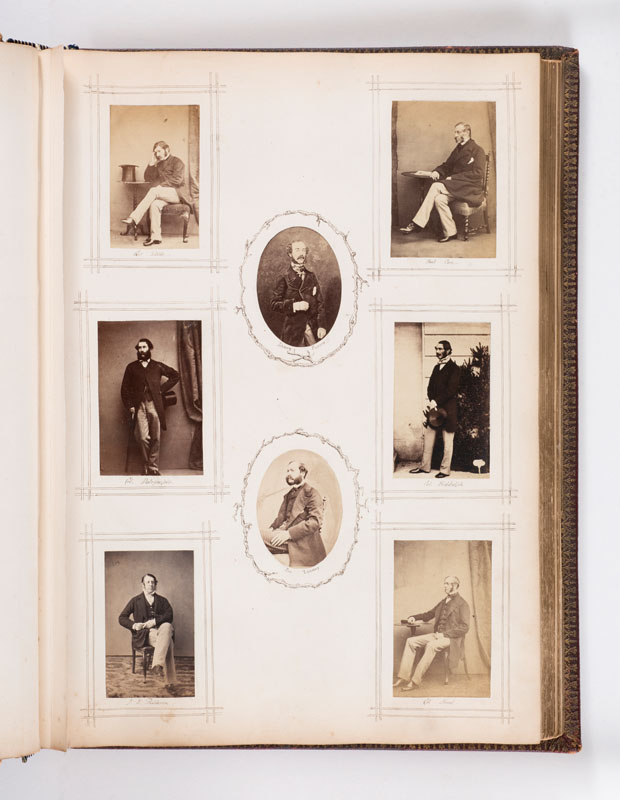 Captain Joseph “Josey” Lockart Little (1821-1877) was a well-known gentleman jockey who won the Grand National and the Hunt Cup. John Maunsell Richardson wrote in Gentleman Riders: Past and Present, “Captain Little was a light weight, and as a rider on the flat he could hold his own with the best, while few professionals could beat him in the matter of fineness of hands or strength and elegance of seat.”

Fred Cox was possibly Frederick William Cox (1808-1864), the head of Cox’s Bank, which acted as the British Army’s agents. He lived at Hillingdon House, near Uxbridge, and was married to the Hon. Fanny Pitt-Rivers, daughter of Horace William Pitt-Rivers, 3rd Lord Rivers.

John Home Purves (c. 1816-1867), a nephew of Lady Blessington, was a Col. in the Grenadier Guards and a Groom of the Privy Chamber in 1859. Later he was Equerry and Comptroller of the Household to H.R.H. the Duchess of Cambridge.

Col. (later General) John Hamilton E. Dalrymple (1819-1888) served in the Scots Fusilier Guards and fought in the Crimean War. He was present at the Braemar Gathering in 1866 attended by Queen Victoria.

Col. Thomas Myddleton Biddulph (1809-1878), son of Robert Myddleton Biddulph of Chirk Castle and his wife Charlotte Myddleton, served in the 1st Life Guards and 7th Light Dragoons. He was appointed Master of the Household to Queen Victoria in 1851 and Extra Equerry to the Queen in 1854. He married Mary Frederica Seymour, daughter of Frederick Charles William Seymour and Lady Mary Gordon, one of the Queen’s maids of honour, in 1857. He was knighted in 1863 and appointed as a Privy Counsellor after resigning as Master of the Household in 1866.

“Boo” Lennox was probably Lord Alexander Gordon Lennox (1825-1892), fourth son of the 5th Duke of Richmond and Lady Caroline Paget, and a younger brother of the 6th Duke of Richmond, Lord Henry Lennox and Princess Edward of Saxe Weimar. He was a Captain in the Royal Horse Guards and M.P. for New Shoreham.

John Loraine Baldwin was a cricketer and founder of I Zingari. He was associated with the Canterbury Old Stagers amateur dramatic society and was a member of the Four-in-Hand Club.