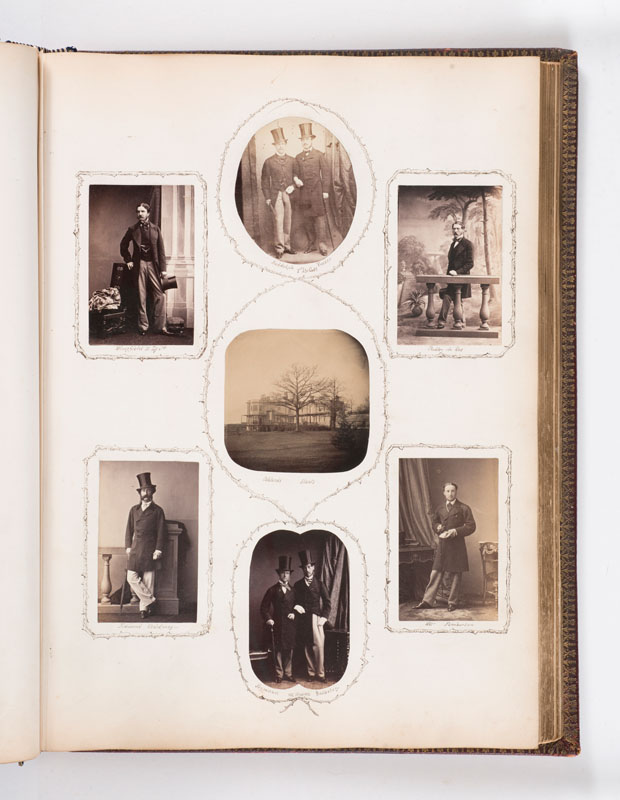 Dudley Charles Fitzgerald de Ros, 24th Baron de Ros (1827-1907), was the son of William Fitzgerald de Ros and Lady Georgiana Lennox. He was a Captain in the 1st Life Guards and served as Equerry to the Prince Consort from 1853 to 1861, and then to Queen Victoria (as Col.) from 1861 to 1874. He was married to Lady Elizabeth Egerton, daughter of Thomas Egerton, 2nd Earl of Wilton, an elder sister to Ladies Alice and Katherine Egerton. He was a member of the Windsor Strollers.

Oaklands House in Waterlooville, Hampshire had been the home of General Napier, who was related to the Lennox family. He was Commander-in-Chief in India and conquered Sindh. He died in 1853. Hampshire is sometimes abbreviated in written form to “Hants”.

Edmond Henry St. John Mildmay was an army officer who served as an Equerry to the Duke of Cambridge, like Charles Tyrwhitt. He served with Radetzky’s Hussars in the Austrian Army and was British Commissioner at the Austrian Army HQ in 1859.

Seymour VII Hussars was probably Col. (later Major-General) Francis Seymour of the Scots Fusilier Guards who served in the Crimean War and was made an Extra Groom in Waiting to the Queen in 1862. Captain Richard Mostyn Lewis Williams Bulkeley (1833-1884) of the 7th Hussars came from a family that owned Baron Hill, near Beaumaris, on the island of Anglesey. He married (as his second wife), Madge Williams, after divorcing his first wife, Mary Emily Baring, in 1864. He succeeded his father as 11th Bt. in 1875, and was associated with horse racing rather than cricket.

Captain (later Col.) Kit Pemberton was in the Scots Fusilier Guards and a prominent member of the Windsor Strollers. He was killed by French soldiers after the Battle of Sedan in 1870, in which he was acting as a correspondent to the Times.