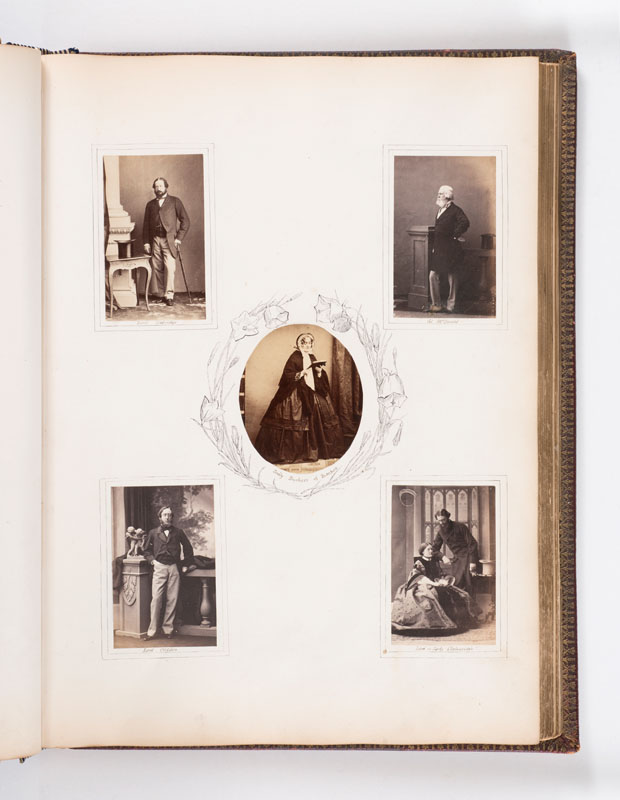 Henry William George Paget, Earl of Uxbridge, was the eldest son and heir to the 2nd Marquess of Anglesey, whose main seat was at Plas Newydd, Anglesey. Albert Ricardo knew the Earl of Uxbridge as a fellow cricketer. There were also family connections between the Pagets and the Tyrwhitt family. Henry’s distant cousin, Eleanor Paget, had married into the Jolliffe family and was the mother-in-law of Mrs. Ricardo’s sister, Leila. Mrs. Ricardo’s childhood home, Stanley Hall, was not far from the Paget estate at Beaudesert, Staffordshire.

Col. James MacDonald was a fellow Equerry and aide-de-camp to the Duke of Cambridge, then Commander-in-Chief of the Army, with Col. Charles Tyrwhitt.

Emily Frances, née Smith, was the second wife and widow of the 7th Duke of Beaufort, who had died in 1853. Her mother was a sister of the Duke of Wellington. As Emily was the sister of the Duke’s first wife, the marriage could have been annulled, but it was finally accepted, and they had seven children.

Henry Agar-Ellis, 3rd Viscount Clifden (1825-1866), served as a Gentleman of the Bechamber to the Prince Consort from 1846 to 1852 and married Eliza Horatia Frederica Seymour (sister of Mrs. Biddulph) in 1861. He was a well-known racehorse owner, famed for his generosity. He gave £2000 to the jockey, Sim Templeman, who won the Derby on his horse, Surplice.

Edward Bootle-Wilbraham (1837-1898) succeeded his grandfather as Baron Skelmersdale in 1853 and became a Conservative politician. He was created 1st Earl of Lathom in 1880. He married Lady Alice Villiers, daughter of George Villiers, 4th Earl of Clarendon, in 1860. This was probably a photograph taken to mark their wedding. He played cricket for I Zingari between 1857 and 1869. His wife was described by Edward Chandos Leigh in his memoirs, Bar, Bat and Bit as “one of the most charming women I have ever had the pleasure of meeting”, and he recalled her taking part in amateur theatricals at Croxteth. She had nine children, but was killed in a carriage accident in 1897, at the age of 56.