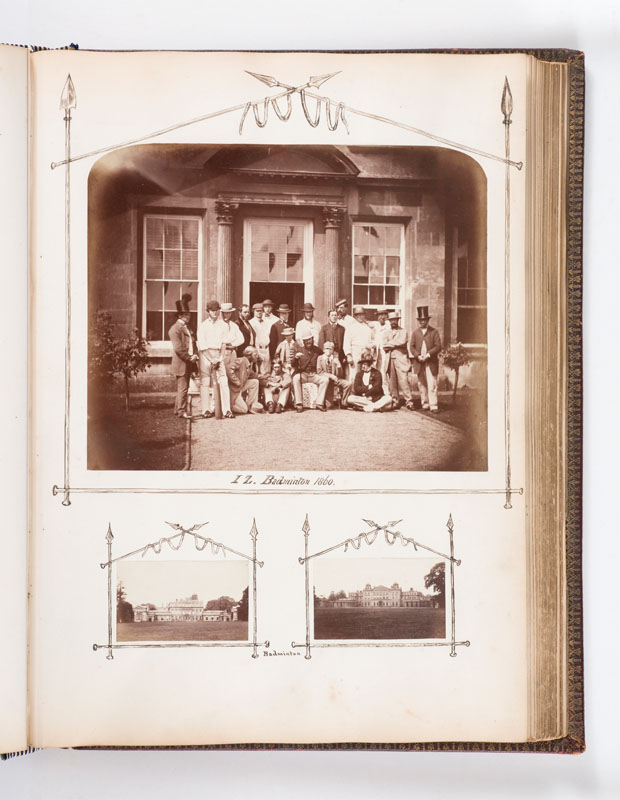 I Zingari visited Badminton in 1858, 1859 and 1860 to play matches against local teams, and they also enjoyed seeing the hounds of the Beaufort Hunt being trained in the evenings, according to an article in the London Standard of 13 August 1860. This gave full details of I Zingari’s matches against Cirencester and Colonel Kingscote’s Eleven. The I Zingari team included the familiar figures of Spencer Ponsonby, Wingfield Fiennes, Edward Tredcroft and Edward Chandos Leigh. There was a rather sweet touch in the match details – the Marquess of Worcester, then 13 years old (who appears kneeling in the front row in this photograph, and later in the album with his mother, the Duchess of Beaufort), was allowed to join I Zingari as last man in their match against Cirencester. He was bowled out for a duck (no score), but at least he could say that he had played for I Zingari! They already had a comfortable score which enabled them to win the match without having to take the field for a second innings, so they could afford to let a youngster have a go! But in the second – much tougher – match against the Kingscote team, when they needed all their best men, the little Marquess did not get another chance to play!

Two views of Badminton House. Edward Chandos Leigh mentioned Badminton as one of the “country houses…thrown open to us” in his memoirs, Bar, Bat and Bit.