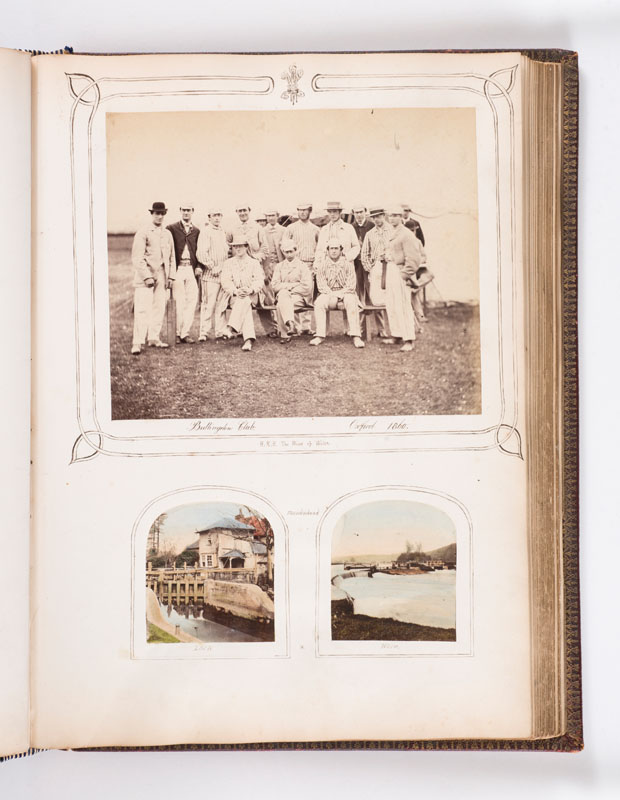 The photograph of the Bullingdon Club cricket team of 1860, which included the Prince of Wales, also appeared in Edward Chandos Leigh’s memoirs, Bar, Bat and Bit with identifications of some of the players. Standing were: 1) Sir Frederick Johnstone; 2) E. Pepys; 3) Sir William Hart-Dyke; 4) Tom Baring; 5) unidentified; 6) The Hon. Walter Portman; and 7) Sir G. Macpherson Grant. Sitting were: Henry Chaplin, H.R.H. The Prince of Wales and J. Carpenter Garnier. The Prince of Wales (1841-1910) was the eldest son of Queen Victoria and later reigned as King Edward VII (1901-1910).

These are hand-coloured photographs of Boulter’s Lock and the weir near Boulter’s Lock. Ray Mead Cottage, where Albert and Charlotte Ricardo lived, was very near to Boulter’s Lock. The photograph on the left shows the wooden lock and the lock keeper’s cottage. A reporter for the Reading Mercury in July 1893 made mention of the amount of boating activity occurring at Boulter’s Lock one fine weekend, along with a reference to Mrs. Ricardo: “On Saturday, 73 launches and 500 boats passed through this lock, and on the following day the craft numbered 92 launches and 800 boats. On Tuesday Mrs. Ricardo kindly entertained the lock assistants to tea.”