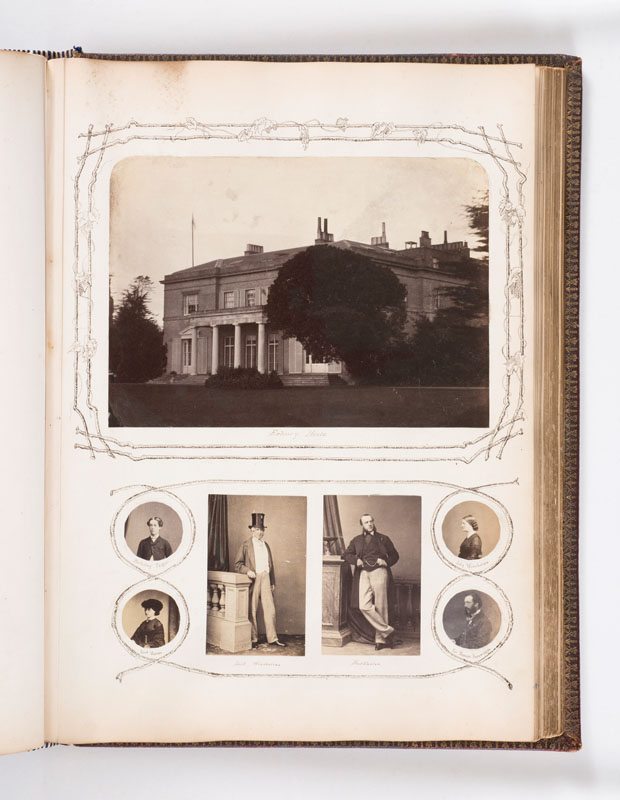 Lord Berkeley Paget was the youngest half-brother of Henry Paget, Earl of Uxbridge, and played cricket for I Zingari.

Mrs. Vivian, née Florence Rowley, appeared in the album twice before, under her maiden name. She became the second wife of John Cranch Walker Vivian, M.P., J.P. and D.L. for Cornwall, on 18 June 1861. This helps to date the making of the album.

George Finch-Hatton, 11th Earl of Winchilsea (1815-1887), succeeded to the Earldom in 1858. (His father fought a duel with the Duke of Wellington in 1830 over Catholic emancipation.) Lord Winchilsea wrote poetry under the name “John Davis”, was a gentleman rider at Goodwood and Newmarket, and a noted gourmet. His first wife was Lady Constance Paget, and his second wife was Lady Elizabeth Georgiana Conyngham, daughter of 2nd Marquess Conyngham and sister of Lord Mount Charles.

Sir John Walter Huddleston (1815-1890) was a criminal lawyer involved in several notable cases in the 1850s. He was made Judge Advocate for the Fleet in 1865 and was knighted in 1875. He was appointed as a Judge in the Court of Exchequer, where he was styled Baron Huddleston, but this title was almost immediately abolished when the Exchequer was absorbed into the High Court of Justice. He was elected M.P. for Canterbury in 1865 and M.P. for Norwich in 1874. He married Diana de Vere Beauclerk, daughter of the 9th Duke of St. Albans. He enjoyed the theatre and horse racing.