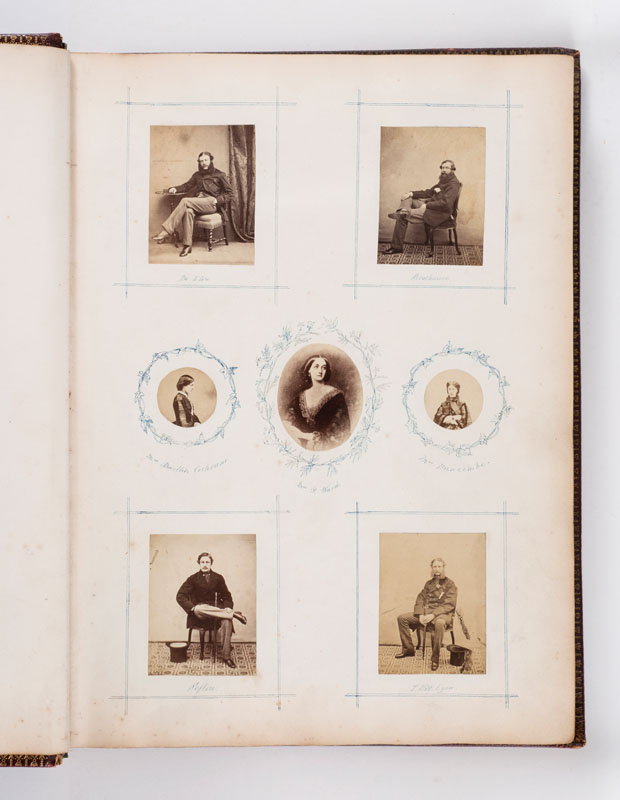 Philip Sidney, 2nd Baron de L’Isle and Dudley, was a great-grandson of Sir Bysshe Shelley, 1st Bt. of Castle Goring, and a second cousin of Sir Percy Florence Shelley, the son of the poet. His father, Philip Charles Sidney, was the 1st Baron de L’Isle and Dudley, created in 1835. He served as a Lieutenant in the Royal Horse Guards, which formed part of the Household Cavalry, Queen Victoria’s bodyguard at Windsor Castle, before succeeding his father in 1851. Philip de L’Isle lived at Penshurst Place in Kent. He is seen later in the album as visiting the Ricardos at Ray Mead Cottage.

Thomas Lyon-Bowes, 12th Earl of Strathmore and Kinghorne (1822-1865), was the Earl of Strathmore when the Ricardo album was being put together. He was a steeplechase rider and a cricketer who played for the Marylebone Cricket Club and I Zingari in the 1840s and 1850s. Claude Bowes-Lyon, 13th Earl of Strathmore and Kinghorne (1824-1904), succeeded his brother in 1865 and changed the family name from Lyon-Bowes to Bowes-Lyon. Claude Bowes-Lyon was a first-class cricketer during the 1840s and a Lieutenant in the 2nd Life Guards. He was the grandfather of Queen Elizabeth The Queen Mother, and the maternal great-grandfather of Queen Elizabeth II. The family seat is Glamis Castle, in Scotland.

Annabella Mary Elizabeth Drummond, daughter of Andrew Drummond of Cadlands, Hampshire, married Alexander Baillie Cochrane, M.P. for Bridport, in 1844. He later sat for other seats and was made 1st Baron Lamington in 1880. He and his wife were well known in London society.

Mrs. Duncombe was possibly the wife of William Duncombe, M.P. for East Retford and the North Riding of Yorkshire, but there were several officers in the Household Brigade with the name Duncombe, and she may have been the wife of one of them.