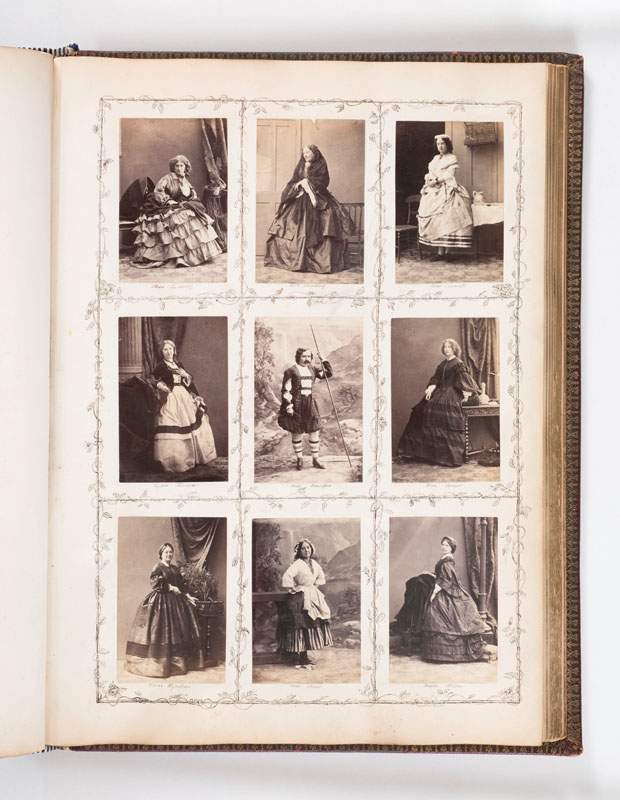 Rose Leclercq (d. 1899) was an actress, burlesque artist and dancer who played in Dion Boucicault’s The Shaughraun. With her sister, Carlotta Leclercq, she often performed in the 1850s and 1860s with the Old Stagers and the Windsor Strollers, as did other professional actresses. However, in order to preserve the group’s amateur status, they were not paid for these performances.

Mary Ann (Fanny) Kehl (1815-1895) played Cordelia to William Macready’s King Lear and created the part of Peg Woffington in Masks and Faces, by Tom Taylor, in 1852. She married Edward Stirling, actor, manager and playwright, and acted with the Old Stagers.

Adeline Cottrell was a young actress of great musical ability who was turning to opera when she died in 1866 at the age of 25. She appears here in the costume she wore for her role in The Maid and The Magpie. She acted with the Old Stagers in 1858 and 1865.

Lydia Thompson (1838-1908) was a dancer and actress who appeared in burlesques and pantomimes from 1852 onwards. She introduced burlesque to America with her troupe “British Blondes” in 1868, to acclaim and some notoriety.

Charlotte Saunders was a well-known actress and singer. She appears here in the role of William Tell in the burlesque Tell and the Strike of the Cantons, which ran at the Strand Theatre from 26 December 1859 to the end of March 1860.

Louisa Ruth Herbert (1831-1921) was a stage actress known for her beauty, who became a model for the artist Dante Gabriel Rossetti. She made her name in Tom Taylor’s play, Retribution, at the Olympic Theatre and appeared with the Old Stagers in 1858.

Miss Wyndham was Fanny Wyndham. She appeared in the opera Un Avventura de Scaramuccia in 1838.

Miss Oliver was Miss Martha Oliver. She appeared in the title role of Charles Selby’s The Bonnie Fish Wife, at the Royalty Theatre in 1860.

Marie Effie Wilton (1839-1921) played Pippo in The Maid and the Magpie at the Strand Theatre in 1858 and Miles in Miss Eily O’Connor, with James Rogers. She became the manager of the Prince of Wales Theatre in 1865 and married the well-known actor Squire Bancroft in 1867.