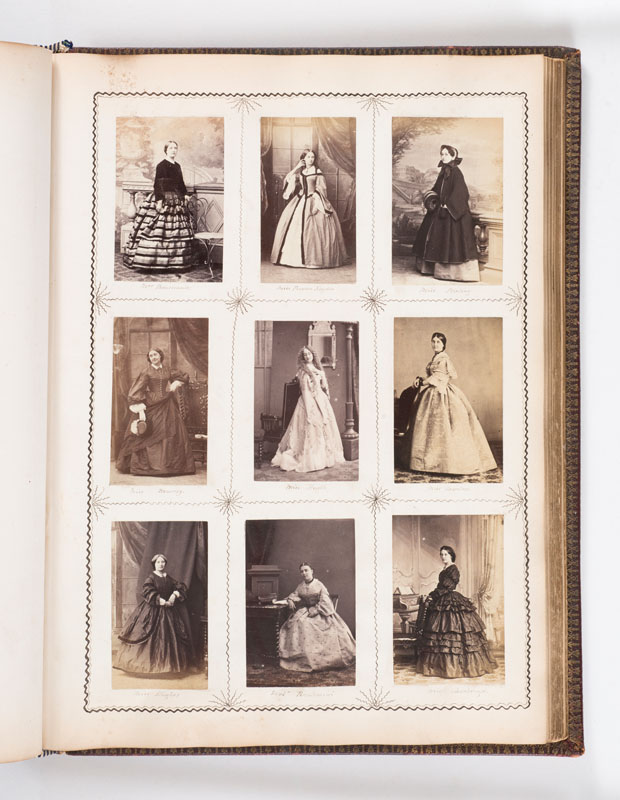 Agnes Kelly Robertson (1833-1916) was the adopted daughter of Charles Kean and an actress of great ability. She married, as his second wife, the prolific Irish playwright, Dion Boucicault, in 1853. She was popular in America, where she was billed as “The Pocket Venus” in plays that he wrote for her. They had six children before he abandoned her in 1885. Nina Boucicault, their daughter, was the first to play the title role in J.M. Barrie’s Peter Pan, beginning in 1904 at the Duke of York’s Theatre.

Miss Florence Haydon (1838-1918) was an actress who had a very long career – she was still appearing in Shaw’s Man and Superman and other plays in 1907.

Miss Fanny Stirling was the daughter of Mrs. Stirling, the famous actress (see page 54). She received favourable reviews as Miss Hardcastle in Goldsmith’s She Stoops to Conquer at the Haymarket Theatre in 1861.

Miss Emma Murray appeared as Cleopatra in a burletta of Antony and Cleopatra in 1843. Miss Murray also appeared with the Old Stagers in 1861 and 1863.

Miss Caroline Heath (1837-1885) was an actress who made her debut in 1852 playing Stella in a comedy, Prima Donna, at the Princess’ Theatre. She married the actor Wilson Barrett.

Miss Jenny Marston of the Olympic Theatre, one of the most popular actresses then on the stage, played with the Old Stagers in the 1850s and the Windsor Strollers in 1859 and 1860. As a young actress, she played Perdita in The Winter’s Tale.

Miss Hughes was probably Fanny Hughes (Mrs. Gaston Murray), an actress who played Apollo in Orpheus and Eurydice at the Strand Theatre in 1863-4, with Ada Swanborough as Eurydice.

Miss Marietta Piccolomini was an Italian opera singer born in Siena in 1834. She performed in London and Paris, but retired on marriage in 1861.