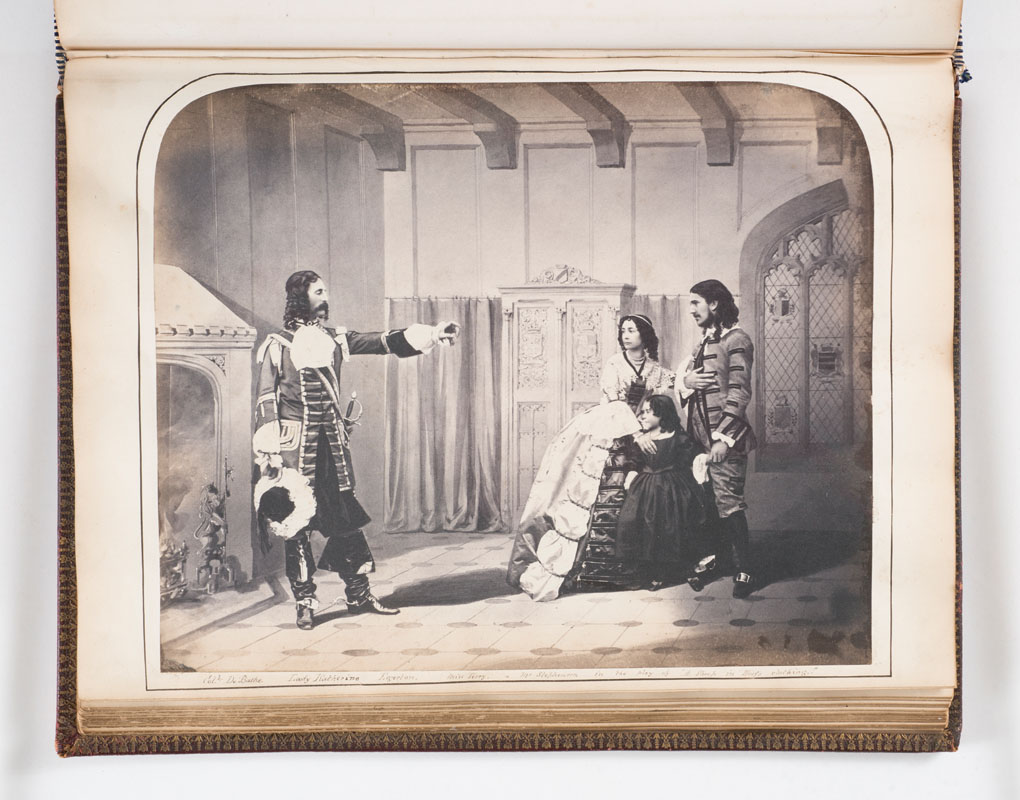 This production of A Sheep in Wolf’s Clothing, a one-act play by Tom Taylor, was put on at Melton Mowbray Corn Exchange on 30 January 1861 by the Hon. Seymour Egerton, President of the Wandering Minstrels. He was then serving as a Captain in the Scots Fusilier Guards. Seymour Egerton was the brother of Lady Katherine Egerton and Lady Alice Egerton. In 1860, he founded the Wandering Minstrels, who staged concerts and provided musical accompaniments for the Windsor Strollers. Most of the actors at Melton Mowbray had previously appeared with the Old Stagers society at Canterbury, and the play had been performed by them in 1858.

Col. Henry Percival de Bathe (1823-1907), later General Sir H.P. de Bathe, 4th Bt., here playing Col. Percy Kirke, was a very keen amateur actor who was connected with both the Old Stagers and the Windsor Strollers. Col. de Bathe had served as aide-de-camp to Lord Raglan at the Siege of Sebastopol during the Crimean War, and even there he was said to have taken part in a dramatic performance put on by the Guards. The Journal of the Household Brigade of 1866 said of him, “Colonel de Bathe, as usual, was distinguished by that perfect ease which stamps the accomplished actor.”

Lady Katherine Grey Egerton (1835-1920), here seen playing Anne Carew, was a talented sister of Seymour Egerton. She appeared at the Grand Amateur Theatricals at Melton, not only as an actress, but also as a singer and pianist. It was said of one of the other productions in which she appeared at Melton, “The scenery of The Prison and The Palace was superbly executed; and Lady Katherine Egerton, as Elizabeth, sustained the character with telling effect. Her appearance on the stage on horseback, as an Empress, was received with loud acclaim.” – The Quorn Hunt and its Masters, by William C.A. Blew.

The “Miss Terry” who appears here as a child was seven-year-old Marion Terry (1853-1930), a younger sister of Kate and Ellen Terry, one of the greatest English actresses, who both appeared with the Old Stagers in the 1860s. Tom Taylor was a close friend of the Terry family, and he may have recruited Marion for the role of Sibyl Carew in this production of the play.

Benjamin Charles Stephenson (1839-1906), here playing Jasper Carew, acted with the Old Stagers and the Windsor Strollers. He had a career as a civil servant, but in 1868 started to write for the theatre, using the pen name “Bolton Rowe”. His greatest success was the comic opera Dorothy, with the composer Alfred Cellier. He wrote The Zoo with Arthur Sullivan, and Diplomacy, a popular play. His account of the history of the Windsor Strollers appeared in Amateur Clubs and Actors, W.G. Elliot, ed., which is available as an e-book.

(Tom Taylor was also involved in many productions by the Old Stagers in the 1850s, both as actor and author of many of the plays they put on, and the Epilogues, with which they closed the evening. The full text of A Sheep in Wolf’s Clothing is available as an e-book.)