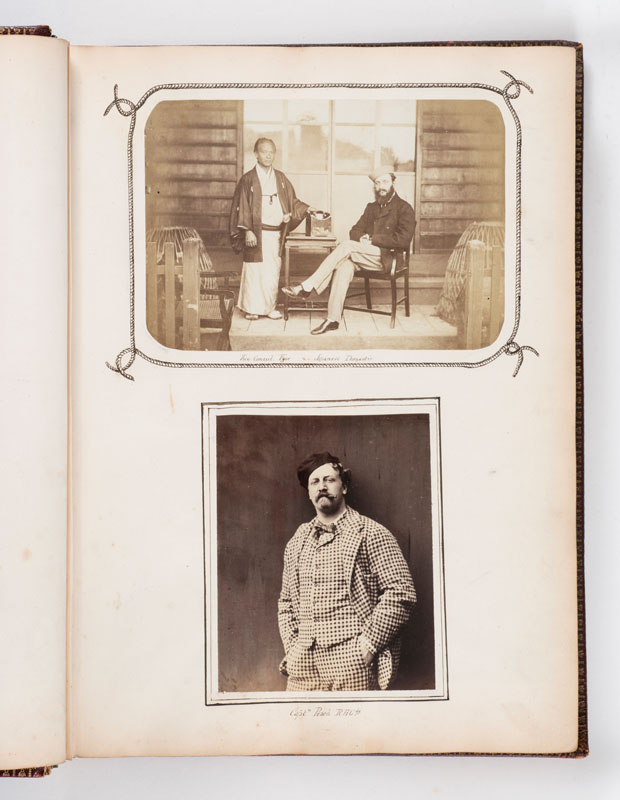 Captain Francis “Punch” Howard Vyse (1828-1891) was the youngest son of Major-General Sir Richard William Howard Vyse (1784-1853), a distinguished Egyptologist. The family lived at Stoke Place, not far from Maidenhead. Francis’ elder brother, Richard Henry Richard Howard Vyse, married Julia Agnes Jolliffe, Leila’s sister-in-law, in 1856. “Punch” seems to have been a particular friend of the Ricardos, as there are many photographs of him in the album, and he is often just referred to by his nickname. He was a Captain in the Royal Horse Guards (Blues), but retired in 1857. In 1859, he was appointed as a Vice-Consul, at the time when Britain was first establishing diplomatic relations with Japan. He became Acting Consul at Kanagawa, near Yokohama, where this picture was taken. In 1860, Edward Barrington de Fonblanque, who wrote Niphon and Pe-che-li: Two Years in Japan and Northern China, spent ten months in Kanagawa. He spoke warmly of Howard Vyse, who he said was “ever kind, considerate and unselfish – and no unworthy representative of English manliness and honour; as is sufficiently testified by the respect in which he is universally held by his countrymen, and the unusual regard entertained, by the Japanese of all classes, for ‘the Consul with the big heart’”.

Captain Henry Peach Keighly-Peach (1834-1905) was heir to his great-uncle, Samuel Peach, of Idlicote House, Warwickshire, whose surname he assumed in 1838. He was Captain in the Royal Horse Guards (Blues) and a cricketer. He also took part in the Windsor Strollers, an amateur dramatic society formally established in November 1860, of which Albert Ricardo was a founder-member. Captain Peach later became a J.P. for Warwickshire and Worcestershire.