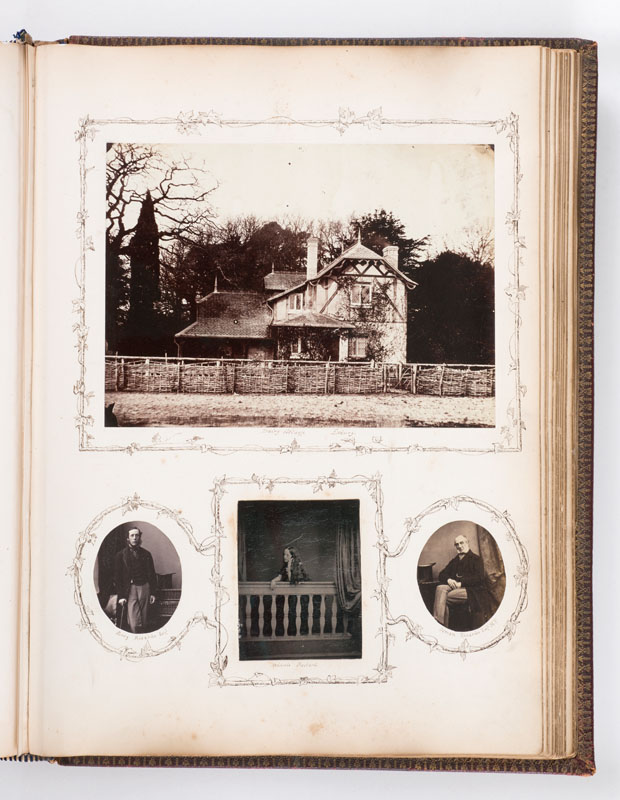 This is another view of the dairy cottage, taken from the opposite side of the house.

Percy Ricardo, J.P., D.L. (1820-1892), was Albert Ricardo’s first cousin and of much the same age. He was the eldest son of Ralph Ricardo, of Bramley Park, Guildford Surrey, and was a member of the Stock Exchange from 1842 to 1892. He lived in Westbourne Crescent near Lancaster Gate (Hyde Park). He married Matilda Mawdesley Hensley. They had two sons, Horace and Francis, who became Colonels in the Grenadier Guards and played a large part in putting on a “Guard’s Burlesque” in the 1880s. Their daughter, Amy, married Charles Henry Gordon Lennox, Earl of March, in 1868 and had five children, but died in 1879 at the age of 32. Her husband became the 7th Duke of Richmond in 1903.

Minnie (born Emmeline) Bastard was Albert Ricardo’s niece. She was the daughter of his sister Anna Esther Ricardo, who married John P. Bastard in 1841. In People and Places; a Life in Five Continents (available as an e-book), Arthur Louis Keyser wrote, “my cousin Miss Bastard (later Lady Rivers, and later again Mrs. Thorold) was the first to set the fashion of dropping her title when marrying again, an action which met with special Royal approval at the time.”

This photograph is a pannotype (wet collodion process on leather).

Osman Ricardo (1795-1881) was a first cousin of Albert Ricardo, but very much older, and the eldest son of David Ricardo, the political economist. He married Harriet Mallory and was M.P. for Worcester from 1847 to 1865. He lived at Bromesberrow Place near Ledbury in Worcestershire, described in Kelly’s Directory of 1856 as “a mansion of great extent, finished in a very superior and decorative style.” He also had a London house in Eaton Place.