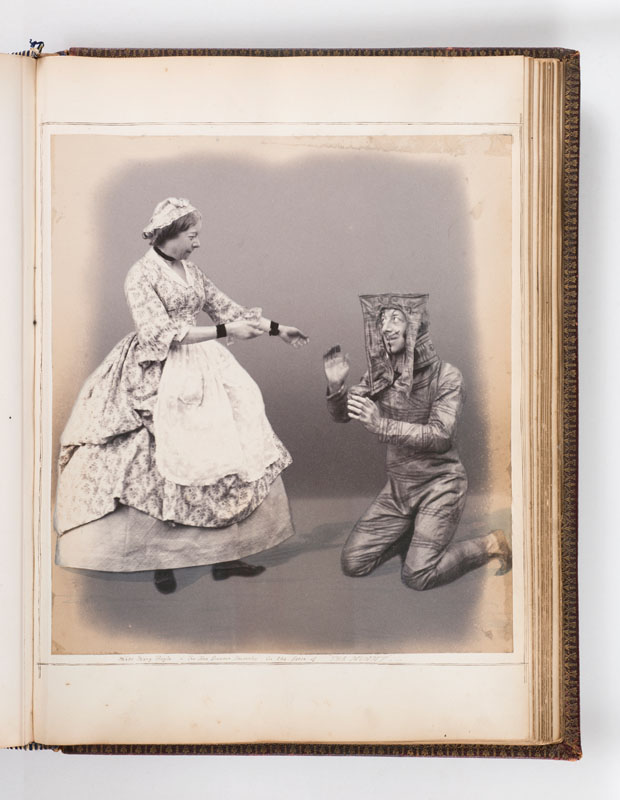 Miss Mary Boyle & the Hon. Spencer Ponsonby in the farce of “THE MUMMY”.

The Mummy, a farce in one act by William Bayle Bernard (1807-1875), an American-born London playwright and critic, had been a popular success on its debut at the Theatre Royal, Adelphi, and was also produced by the Old Stagers in 1856. This production was put on at Melton Mowbray Corn Exchange on 30 January 1861. The Hon. Miss Mary Boyle (1810-1890) was the daughter of Vice-Admiral the Hon. Courtenay Boyle and the niece of Edmund Boyle, 7th Earl of Cork and Orrery. Her aunt, Lady Cork, was a brilliant hostess and conversationalist and held parties attended by many literary and political personalities. Mary herself was a writer and correspondent of Walter Savage Landor and of Charles Dickens, whom she met in 1849. She was often a guest of Charles Dickens and his wife in the 1850s and took part in his private theatricals. He considered her to be the best amateur actress he had ever seen. Edward Chandos Leigh said of her that “she was certainly a wonderful actress up to the last years of her life.” (Bar, Bat and Bit). The Hon. Spencer Cecil Brabazon Ponsonby (later Ponsonby-Fane) (1824-1915) was a founder of of the Old Stagers amateur dramatic society at Canterbury in 1842 and the I Zingari Cricket Club in 1845, and played an active part in both in the 1850s and early 1860s. He also played first-class cricket for Middlesex and Surrey, and later administered Somerset and Harrow Cricket Clubs. At the same time, he had a distinguished career as a civil servant and diplomat, serving as Private Secretary to Lord Palmerston (when Foreign Secretary), the Earl of Clarendon and Earl Granville. He was involved in negotiations for the Treaty of Paris, which concluded the Crimean War in 1856. He was also Comptroller of the Lord Chamberlain’s office and Gentleman Usher to the Sword of State. He married Louisa Dillon in 1847 and had 11 children. In 1875, he changed his name to Ponsonby-Fane on inheriting the estate of Brympton d’Evercy, described as the “most beautiful house in England,” from his aunt, Lady Georgiana Fane. He spent the remainder of his life improving the gardens there.