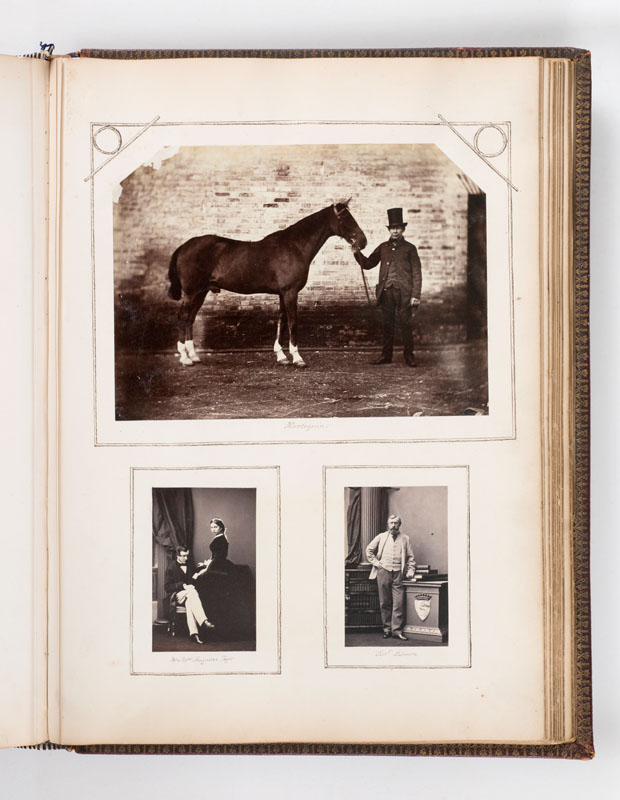 Harlequin was probably one of Albert Ricardo’s horses.

The Rt. Hon. Sir Augustus Berkeley Paget KCB (1823-1896) was the son of Sir Arthur Paget and Lady Augusta Fane, and nephew of the 1st Marquess of Anglesey. He was a career civil servant, diplomat and ambassador, knighted in 1863. He was Minister to Denmark from 1859 to 1866; Minister to Italy from 1876 to 1883; and Ambassador to Austria from 1884 to 1893. He was appointed as a member of the Privy Council in 1876. It was said of him, “Sir Augustus had a natural gift of attracting and retaining throughout his life the respect and affection of all with whom he came in contact. Few more warm-hearted, straightforward, generous and hospitable Englishmen can have ever existed.” In 1860, he married Walburga Ehrengarde Helena Hohenthal (1839-1929), the daughter of Count von Hohenthal, and a former lady-in-waiting to Victoria, Princess Royal, who married Prince Frederick Wilhelm of Prussia in 1858. She became an intimate friend of Queen Victoria and was instrumental in helping to arrange the marriage of the Prince of Wales to Princess Alexandra of Denmark in 1863. Lady Paget was a diarist and writer. Embassies of Other Days was the title of her memoirs, published in 1923. Lady Paget was also an early proponent of the hollow earth theory. In her book, Colloquies with an Unseen Friend (1907), she claimed that descendants of Atlantis had moved to cities beneath a desert, and that an entrance to this subterranean kingdom would be discovered in the 21st century. She strongly condemned the practice of eating flesh-food and was a vegetarian. The Pagets had three children.

George Ponsonby O’Callaghan became 2nd Viscount Lismore of Shanbally in the county of Tipperary in 1857. He had married Mary Norbury, sister of Annie, Lady Cosmo Russell, in 1839. He served as an officer in the 17th Lancers and was High Sheriff of Tipperary in 1853. His coat of arms, surmounted by a Viscount’s coronet, can be seen on the plinth in the photograph.