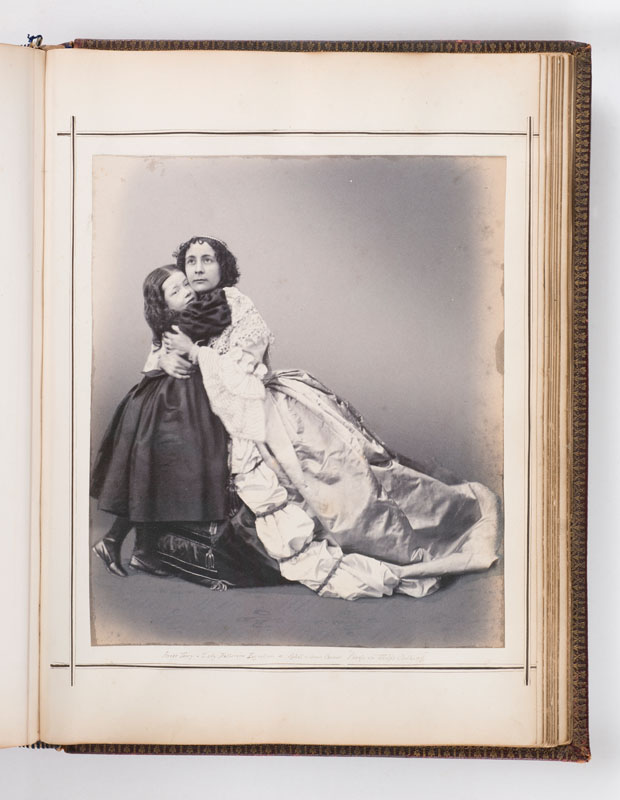 This production of A Sheep in Wolf’s Clothing by Tom Taylor was put on at Melton Mowbray Corn Exchange on 30 January 1861. “The dresses, which were supplied by Mr. Nathan, of London, were really superb, and the appointments were exceedingly correct.” – Leicester Journal, 1 February 1861. Marion Terry (1853-1930) came from a theatrical family – her parents were comic actors in a touring company based on Portsmouth, and five of their 11 children became actors, while two others went into theatrical management. Her first professional stage appearance was in July 1873 as Ophelia in a production of Hamlet directed by Tom Taylor in Manchester. These photographs show that she had been recruited to take part in the Melton Mowbray private theatricals some 12 years earlier. Although never as well known or highly regarded as her sister, Ellen Terry, she had an acting career that lasted 50 years, and she played leading roles in more than 125 plays. She was especially successful in the plays of W.S. Gilbert, Oscar Wilde and Henry James, in the 1880s and 1890s. Lady Katherine Egerton (1835-1920) was the fifth daughter of Thomas Egerton, 2nd Earl of Wilton, and a sister of Lady Alice and Captain the Hon. Seymour Egerton. She appeared on all three nights of the Melton Mowbray theatricals in January/February 1861, as a singer as well as an actress. Later in the year, she married the Hon. Henry John Coke (1827-1916), younger brother of Thomas Coke, 2nd Earl of Leicester. As a personal friend and confidante, Lady Katherine was later appointed as a Lady in Waiting to the Duchess of York, and a Woman of the Bedchamber when the Duchess became Queen Mary.