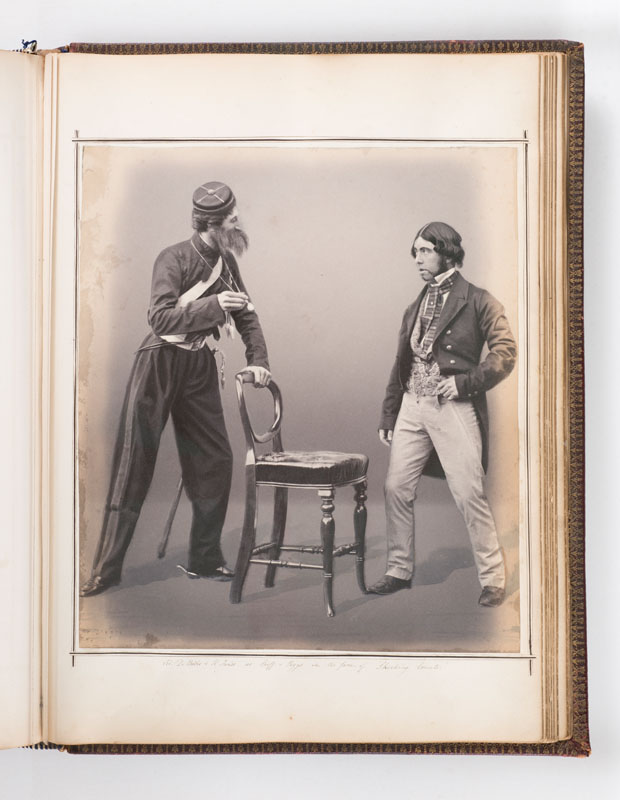 This production of Shocking Events, a farce in one act by William Bayle Bernard, was put on at Melton Mowbray Corn Exchange on 1 February 1861. It was also produced by the Old Stagers in 1860. Col. Henry Percival de Bathe (who has appeared previously in the album) and Quintin Twiss acted together on many occasions. Quintin William Francis Twiss (1835-1900) was a grandson of the actress, Fanny Kemble, who retired from the stage when she married the author, Francis Twiss, in May 1786. Quintin was a clerk in the Treasury, but he was also a well-known amateur actor. He appeared with the Old Stagers in many productions, sometimes under the nom de théâtre of “Oliver Twist”. He was described as a promising actor when he was an undergraduate in Cambridge in June 1857 and, as such, was photographed by Charles Dodgson (Lewis Carroll) in both street clothes and costume. He took part in the Grand Amateur Theatricals at Melton Mowbray, from 30 January to 1 February 1861, as both an actor and singer. He next appeared in an amateur dramatic performance in Cambridge attended by the Prince of Wales, on 2 February 1861, and was mentioned in Lady Layard’s Journal: “Quintin Twiss acted capitally in The Thumping Legacy and kept us in a roar the whole time – The Prince seemed very much pleased.” He appeared in a charity performance of Cox and Box in 1867, a popular short piece with music by Arthur Sullivan, which was often performed by both amateur and professional companies. In Amateur Clubs and Actors (available as an e-book), William Yardley wrote, “No other trio, amateur or professional, has ever approached the Hon. Sir Spencer Ponsonby-Fane, General Sir Henry P. de Bathe and Mr. Quintin Twiss, as Cox, Bouncer, and Box respectively.”