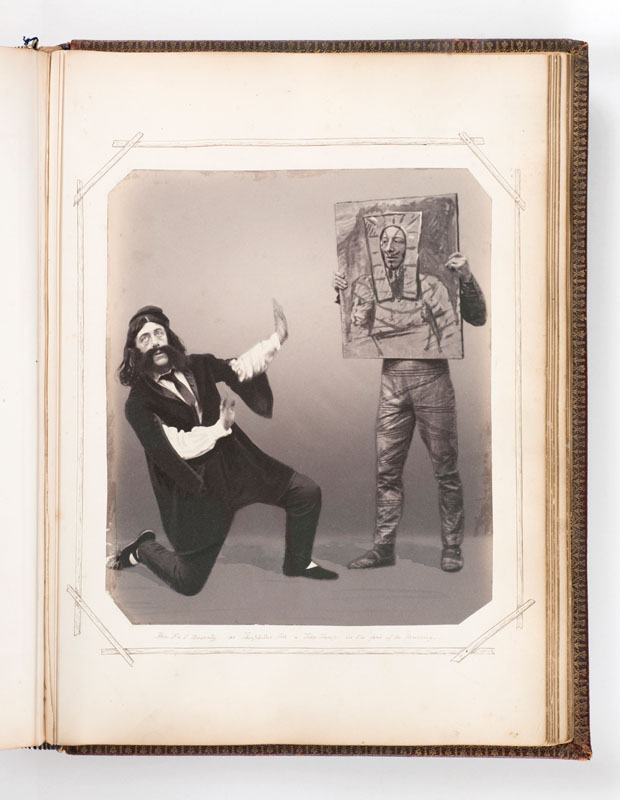 The Hon. F & S Ponsonby as Theophilus Pole & Toby Tramp in the farce of “The Mummy”

The Mummy, a farce in one act by William Bayle Bernard, was put on at Melton Mowbray Corn Exchange on 30 January 1861. The Hon. Frederick George Brabazon Ponsonby, later 6th Earl of Bessborough (1815-1895), was the third son of John Ponsonby, 4th Earl of Bessborough and Lady Maria Fane. “The Hon. S. Whitehead” was a nom de théâtre of his younger brother, Spencer Ponsonby, who was a founder of the Old Stagers dramatic society in 1842 and I Zingari Cricket Club in 1845, playing a major role in both. He inherited the Earldom in 1880 when his elder brother died without a male heir. “The Hon. S. Whitehead kept the house in a roar of laughter as the veritable Pharaoh (Toby Tramp) preserved in pickle for three thousand years; E.S.E. Hartopp, Esq., Captain Hartopp, and the Hon. F. Ponsonby contributing their quota to the gratification of the audience. The singing and dancing of Toby in his merry costume called forth a burst of applause and an encore.” – Grantham Journal, 2 February 1861.