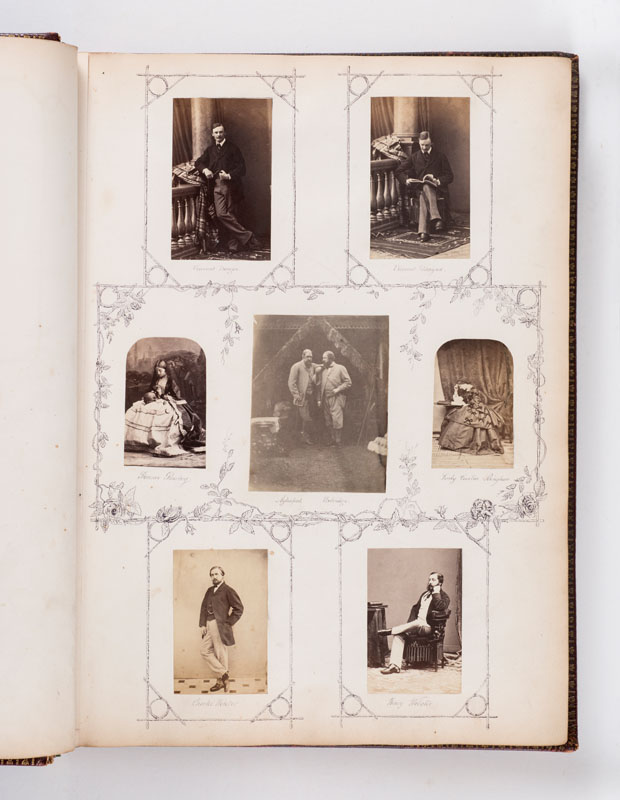 Florence Grosvenor Rowley (1836-1873) was the eldest daughter of Major George Rowley, of the Bombay Cavalry. She married John Cranch Walker Vivian (1818-1879), M.P., J.P. and D.L. for Cornwall, on 18 June 1861, as his second wife. They were divorced in 1869, after Florence left her husband for John Henry de la Poer Beresford, 5th Marquess of Waterford (1844-1895), whom she married on 9 August 1872. She gave birth to a stillborn baby on 27 March 1873 and died on 4 April 1873. She and her child were buried together. A memorial commemorating them, by the eminent sculptor Sir Joseph Edgar Boehm, is in the local church on the Waterford’s Curraghmore estate. It was commissioned by her husband, Lord Waterford. The photograph of Florence Rowley holding a skull perhaps derives from a theatrical performance. It seems almost prophetic, in view of the tragic circumstances surrounding her untimely death.

This photograph helps to date the making of the album, as Florence Rowley appears here under her maiden name – before her marriage in June 1861 – and later on as Mrs. Vivian.

Heneage Finch, 6th Earl of Aylesford, and Henry Paget, Earl of Uxbridge, played cricket for I Zingari. Both appear to be dressed for the country and the background is the same as that of the central photograph on page 3.

Lady Cecilia Catherine Bingham, née Gordon Lennox, was the youngest daughter of the 5th Duke of Richmond and his wife, Lady Caroline Paget, who was the daughter of the 1st Marquess of Anglesey. She was a cousin of the Earl of Uxbridge.