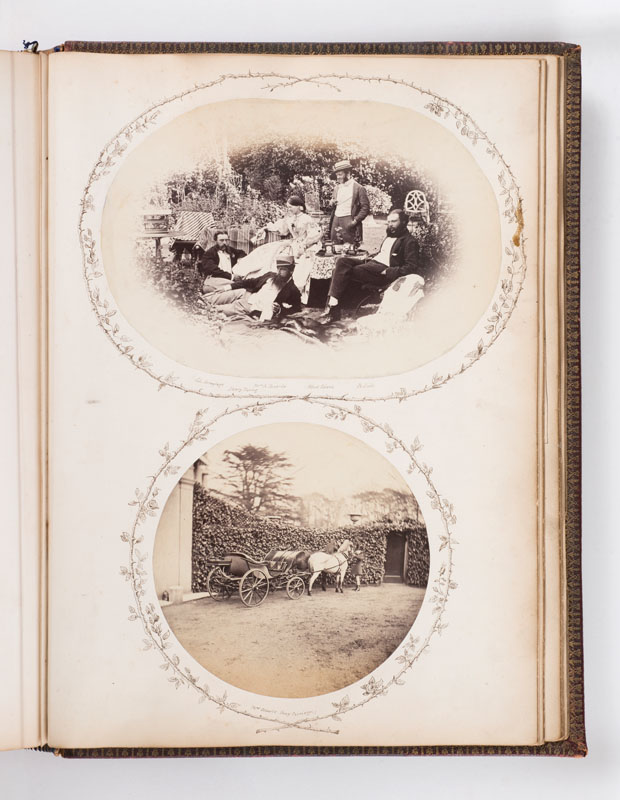 This charming photograph shows Albert and Charlotte Ricardo with some guests in the garden at Ray Mead Cottage. There are chairs and rugs on which their guests are reclining. Charlotte has a table beside her on which there are a number of small ornaments, and there is a birdcage on the left of the picture. Albert, standing beside her, is wearing a boater with a ribbon around it, probably with the I Zingari colours of red, gold and black. The three guests are Col. Henry Armytage, Henry Baring and Philip Sidney, Baron de L’Isle and Dudley, who has appeared previously in the album.

Col. Henry Armytage served in the Coldstream Guards during the Crimean War, as did Leila’s husband, Captain Hylton Jolliffe, who died at Balaclava, and was a member of the Windsor Strollers. Col. Armytage was later to have an affair with Mrs. Bulkeley, the wife of a fellow officer and the sister of Henry Baring, who is also in this picture, that was to lead to her divorce in 1864.

Captain Henry Baring (1831-1929) of the 17th Lancers was the son of Henry Bingham Baring and Lady Augusta Brudenell (sister of the Earl of Cardigan who led the Charge of the Light Brigade). Lt. Col. Francis Baring was his younger brother. They were both members of the family that owned Barings Bank, and thus would have been well known to the Ricardos, who were also financiers and stockbrokers.

Charlotte Ricardo’s pony carriage – a four-wheeler – is the same as the carriage seen before with two ponies.