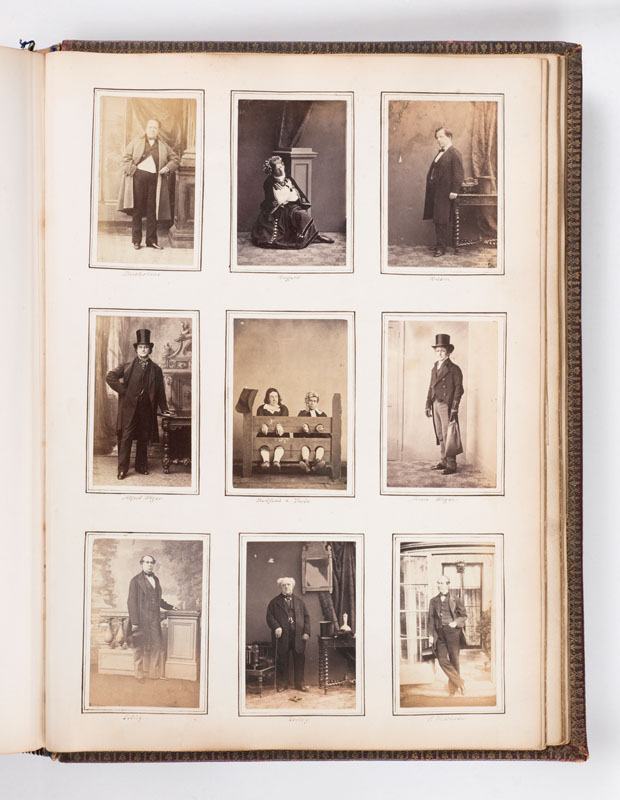 John Baldwin Buckstone (1802-1879) was the author of 150 plays and farces, many performed by the Old Stagers. As manager of the Haymarket Theatre, he produced the plays of Tom Taylor and others, as well as his own.

James Rogers, dressed here as a woman (in the role of Ravina, in The Miller and his Men, by Francis Talfourd and H.J. Byron), was a well-known burlesque actor at the Strand Theatre and had many parts written for him.

Alfred Sydney Wigan (1814-1878) was a leading actor and the manager of the Olympic Theatre from 1853 to 1857. He was an older brother of Horace Wigan. He married the actress, Leonora Pincott, in 1839, and she later appeared as Mrs. Fred Wigan in many productions of the Old Stagers with other actresses from the Olympic Theatre.

John Lawrence Toole (1832-1906) was a comic actor and farceur. He appeared at the Adelphi Theatre from 1858 to 1867, frequently partnering Paul Bedford, whose sedate comic style complemented his more energetic performance.

Horace Wigan was an actor and playwright, and a younger brother of Alfred Wigan.

Charles Selby (c. 1802-1863) was a character actor and playwright who mainly wrote farces.

Robert Keeley (1793-1869) was an actor-manager and female impersonator who played in most of the leading companies of the day. He was coached in his role as Mrs. Gamp by Charles Dickens himself.

Charles James Mathews (1803-1878) was an actor-manager who was unrivalled as a light comedian, and could play French-speaking roles in France. He was the son of the actor, Charles Mathews, who gave his collection of theatrical drawings and paintings to the Garrick Club in 1835. Charles James Mathews was the second husband of Madame Vestris, and toured three times in the United States. He commissioned Dion Boucicault’s successful play, London Assurance.