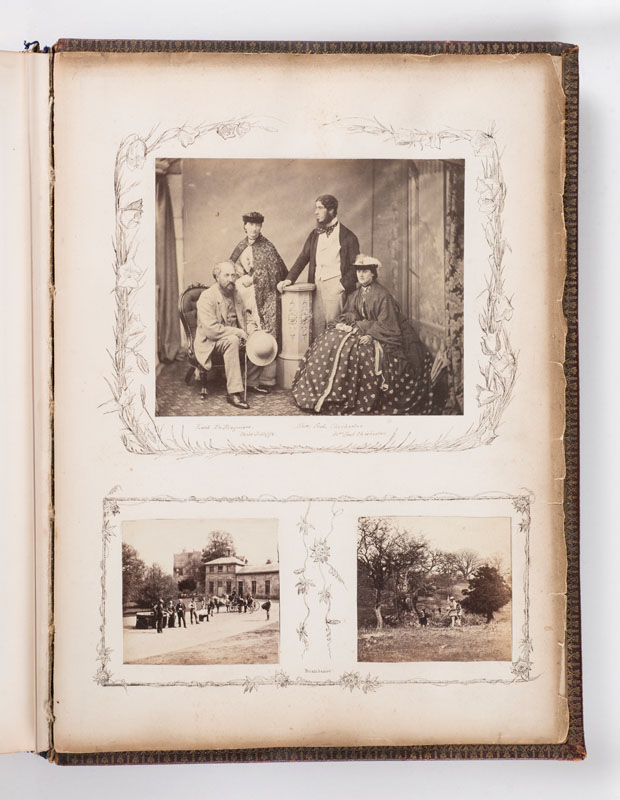 Lord John de Blaquiere, 4th Baron, of Ardkill in the county of Londonderry (1812-1871), was an Irish peer descended from a Huguenot merchant, Jean de Blaquiere, who emigrated to England in 1685, after the revocation of the Edict of Nantes by Louis XIV. In 1844, he was a Captain in the 3rd West India Foot. He purchased the yacht America after its famous win at Cowes in 1851, in the first race of the series now known as the America’s Cup. In 1852, he married Eleanor Amelia Jolliffe, daughter of William Jolliffe, 1st Baron Hylton, and Eleanor Paget, as his second wife. She was a younger sister of Hylton Jolliffe, who married Leila Tyrwhitt. Miss Jolliffe was probably a sister-in-law or niece by marriage of Lord John de Blaquiere. Perhaps she was the Hon. Cecil Emily Jolliffe, who was to marry the Earl of Sefton in 1866, as at the time the album was being put together she was unmarried. The Hon. Frederick Arthur Henry Chichester (1824-1863) was a younger son of Arthur Chichester, 1st Baron Templemore, and Lady Augusta Paget, an aunt of the Earl of Uxbridge. He held the office of Gentleman Usher of the Scarlet Rod. In 1852, he married Frances Marianne Tighe, daughter of Daniel Bunbury-Tighe and the Hon. Frances Crofton.

The photograph on the left probably shows the stable block with various guests or members of staff standing about. The photograph on the right appears to show a shooting party – a man with a gun and a boy behind him (probably a loader) and, perhaps, a beater in the background.