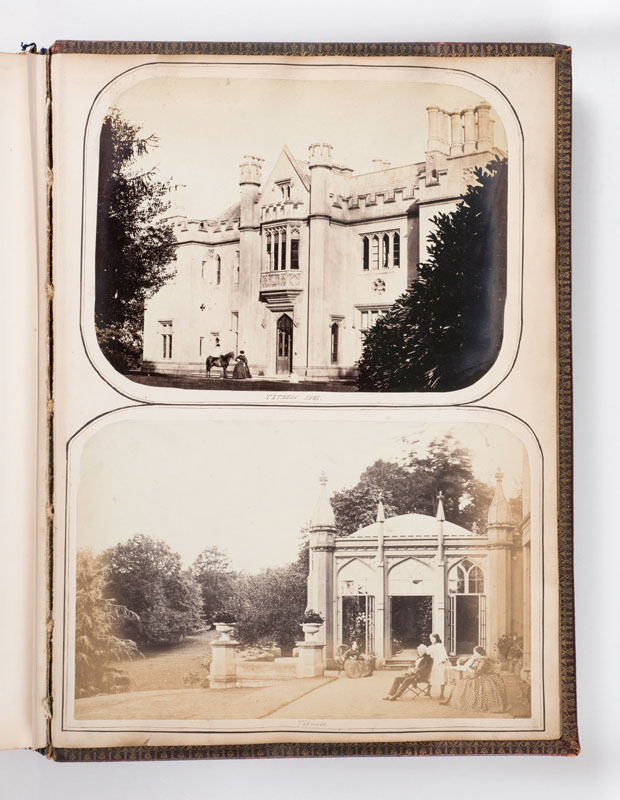 Titness Park, at Sunninghill, Ascot, near Windsor Castle, was an estate leased by St. John’s College, Cambridge, to Albert Ricardo’s unmarried uncle, Samson Ricardo (1792-1862), who was a member of the Stock Exchange from 1821 to 1859 and Liberal M.P. for Windsor from 1855 to 1857. He had a new house built there, designed by the English architect, George Basevi. Samson also had a London home in Grosvenor Place, London.

In the mid-1840s, Albert Ricardo is known to have been living with his uncle at Titness Park and working with him in London. Albert’s mother lived at Titness Park after her husband’s death in Paris in 1834, and was buried in Sunninghill in 1844. After Samson Ricardo died in 1862, St. John’s College sold Titness Park. In the two decades following the sale, during the week of the annual Ascot races, the Prince and Princess of Wales sometimes took up their abode in the mansion, which was in the neighbourhood of the Ascot racecourse.

There are two people in the photograph, a lady standing and a young girl on a horse, but they are not identified.

This photograph shows an elderly man, two ladies and a young girl on the terrace at Titness Park, but they are not identified. The attractive conservatory attached to Titness Park, which was a prominent feature of the house, provides the background to the photograph.

Titness Park was demolished in the first half of the 20th century.