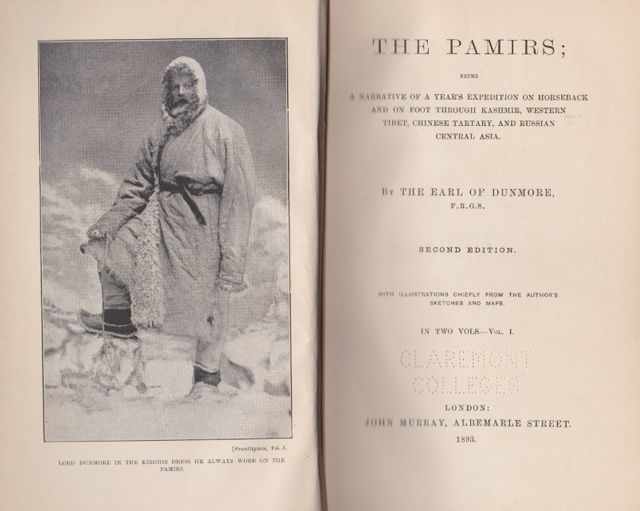 Some sketches made by Lord Dunmore during the expedition 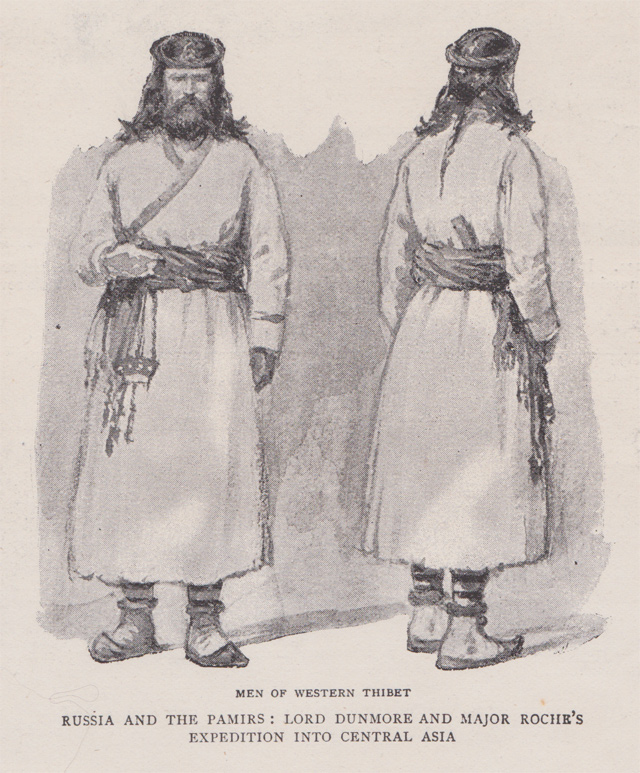 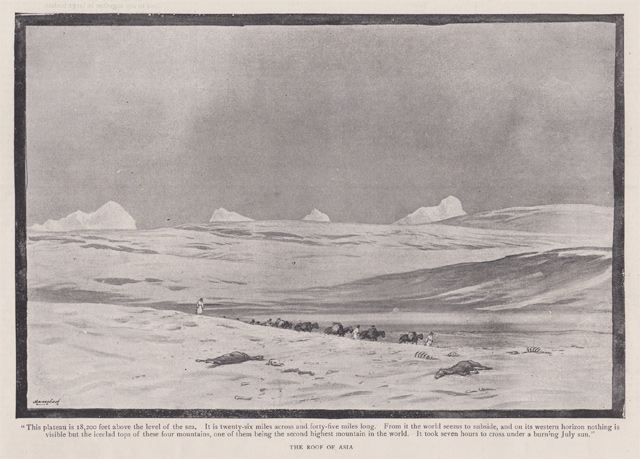 The Karakoram Pass – 18,980 feet above sea level – the highest trade-pass in the world 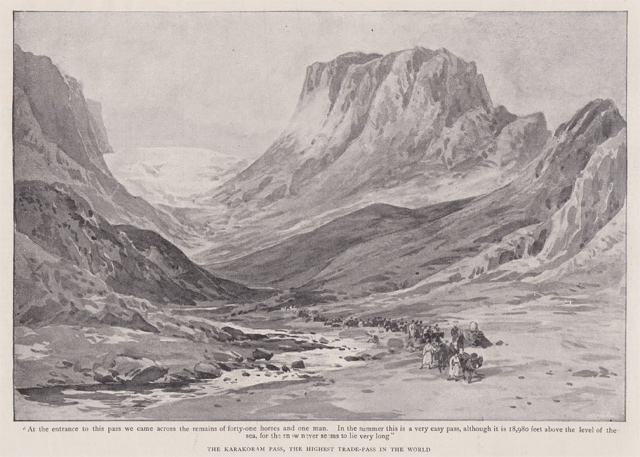 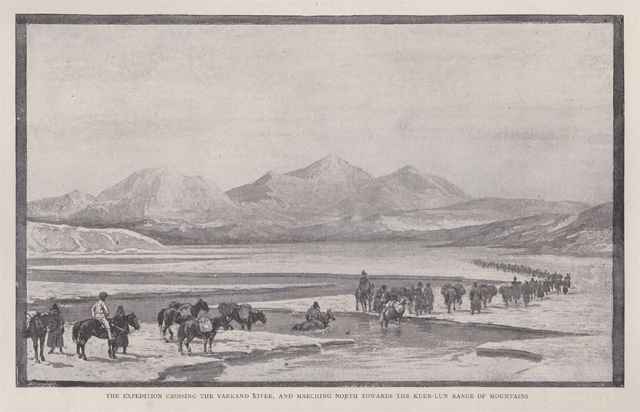 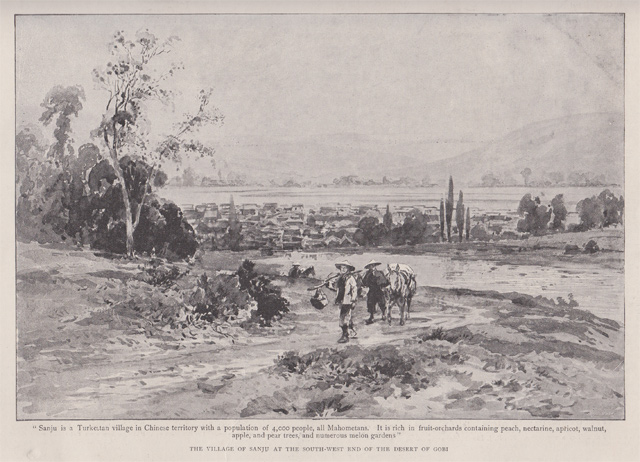 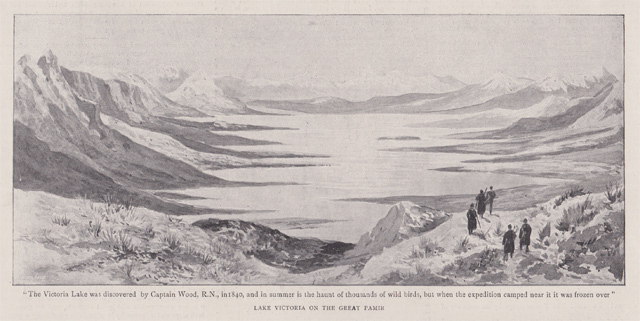 A map showing the route from Rawal Pindi to Samarkand 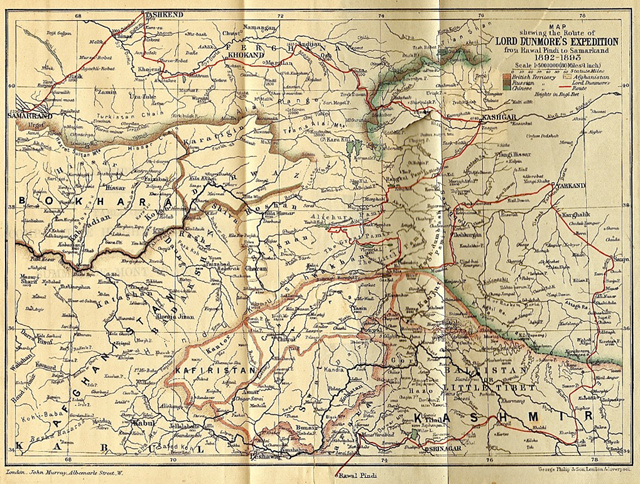 “Russia and the Pamirs: Lord Dunmore and Major Roche’s Expedition into Central Asia.” Published in The Graphic, August-September, 1893.

Early in the spring of the present year a telegram came from Constantinople, saying that Lord Dunmore had arrived in that city after an overland journey through Central Asia from India. The expedition had lasted ten months, for nine of which Lord Dunmore had been accompanied by Major Roche, who, however, was not allowed to enter Russian Central Asia, as he had not a pass from the Imperial Government. The story of their ride through Western Tibet and the Pamirs is of the highest interest and importance at the present moment, when Russia is backing up the filibustering exploits of France in Siam with her moral support, and always advancing and making good her grip on the Pamirs and the mountains which overhang Kashmir. The reproductions from Lord Dunmore’s original water-colour drawings are also of great value, as they illustrate regions which very few Europeans have ever visited. Last month, Lord Dunmore read a paper on his travels before the Royal Geographical Society, in which he gave a summary of his experiences in Western Tibet and in the Roof of the World.

Lord Dunmore landed at Karachi early in February, 1892, and at once set out for Rawal Pindi, where he began to make his preparations for crossing Central Asia. From Rawal Pindi he proceeded to Kashmir, where he fitted out a caravan of sixteen men and twenty horses, and as soon as the passport which would enable him to cross the Chinese frontier arrived from Pekin, started for Leh. The route to Leh or Ladak ran across the Western Himalayas, and in that town, which is the capital of Western Tibet, Lord Dunmore met his travelling-companion Major Roche. This was towards the end of May, and the next three weeks were spent in fitting out a new caravan, as all the Indian and Kashmirian followers had to be dismissed, as unfit for the hard work to come. Thirty picked men who had already travelled with Englishmen, and who were all skilled in some trade, were engaged, and fifty-six wiry little Leh ponies were purchased. Twenty-eight of these were to carry the camp-furniture, the stores, the arms, and the scientific instruments, while eighteen more were told off to carry fodder for the caravan, and four to carry fuel, the remaining six being kept as saddle-ponies. Seventy yaks were also hired for the passage of the Kardong Pass, which the ponies could not cross laden. Half of these marched in single file over the snow, and trod a pathway for the rest of the caravan, only thirty-five yaks being needed to carry the baggage, and, in addition, a flock of mountain-sheep was driven along to provide meat for the party. The men of Western Tibet, as will be seen from our illustration, wear a long white coat, folded across the breast, and fastened round the waist with a broad sash or girdle of brilliant colours. In this sash they carry their pistols and daggers, or a flint and steel. Their hair, which is long and unkempt, is plaited into a pigtail behind, and round their heads they wear a crimson fillet. On their feet they wear pointed Turkish slippers of an orange red. The march from Leh began in June, rather an early season of the year to attempt the Kardong Pass; but, nevertheless, the Pass was successfully crossed; and the caravan struck and crossed the Shyok River, which runs through a wild but beautiful country. After this, several glaciers and passes, varying from 15,000 to 20,000 feet, were crossed, the glare from the July sun upon the snow nearly blinding the travellers, while the piercing wind from the glaciers made breathing difficult, and the freshly fallen snow impeded their march. This region was a waste of snow and ice, and for thirteen days the caravan never met a human being nor saw any vegetation. At last they entered upon the Great Depsang plateau, which they named the “Roof of Asia.” This is a scorching wilderness of sand and shingle, on which no snow lies, in spite of its great altitude. On the burning sand lay the bleached skeletons of horses and other animals which had died in the endeavour to cross the plateau. This desert plateau is 18,200 feet above the level of the sea, and is twenty-six miles across and forty-five miles long. From it the world seems to subside, and on its western horizon nothing is visible but the ice-clad tops of four mountains, one of which is 28,780 feet in height, and is the second highest mountain in the world. On this desolate tableland were wild horses and antelope. It took seven hours to cross it under a burning July sun, and the men and horses suffered a good deal from difficulty of breathing, and many of them were seized with giddiness and vomiting from the rarification of the atmosphere.

About the beginning of the second week in July, the party having descended from the Roof of Asia, reached the foot of the Karakoram Pass. This pass is 18,980 feet in height, and is made the subject of many marvelous stories by native travelers; but Lord Dunmore and Major Roche crossed it without any great difficulty. It is the highest trade-pass in the world, and in the summer is a very easy one, as, in spite of its great height above the level of the sea, snow never seems to lie long upon it. Halfway down the pass on the northern side stands the cairn erected by Captain Bower, 17th Bengal Cavalry, to the memory of Andrew Dagleish, the Central Asian trader and explorer, who was treacherously murdered by a Pathan on April 6, 1888.

This ends Part I.